The first day of 2nd grade 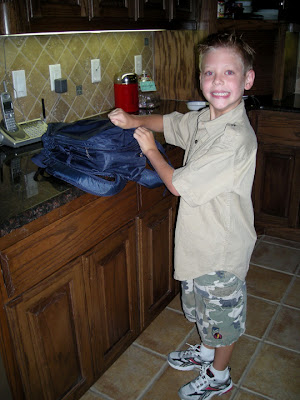 Here is my sweet Jake on Monday morning all ready for his first day of second grade. He wasn't TOO nervous about going to a new school and meeting new friends because his school is brand new so everyone there is pretty much new all over again. He was so excited about the day because I have decided to let him ride the bus this year (yikes)! I know, I know, I'm ridiculous, but I just remember some not so good memories I had of riding the bus as a child and I was scared for Jake to have to go through the same thing. LUCKILY, Jake isn't half the nerd or dork that I was so he made friends with everyone on the bus, he's so friendly!

He said the day was SO easy and that his teacher is SO nice. They were supposed to bring 2 books to school to read and he chose one of his to be his big book about guns that Austin's friend Ed gave to him. He said that about 10 kids wanted to be his reading partner because his book was SO COOL!! He said he was so popular on the first day! What a silly. The bus ride went well too, I took him in the morning, but he rode the bus home and he said he liked it, so I guess we'll keep doing that until he objects!
Posted by Jessica the Jacked LDS at 9:37 PM

okay i haven't read anything yet but you must be posting right NOW because i JUST was here and saw kora and now i see jake.

awww!!! baby jakob lowe... where did you go? i don't know. I guess to the second grade show.

I LOVE first day of school pictures:) Must be the teacher in me:)