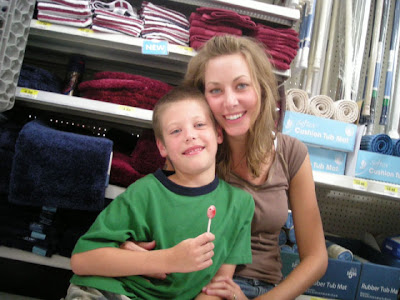 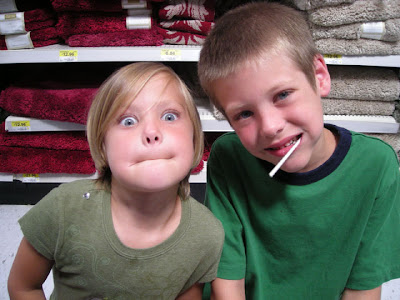 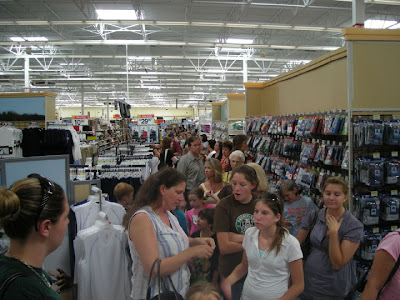 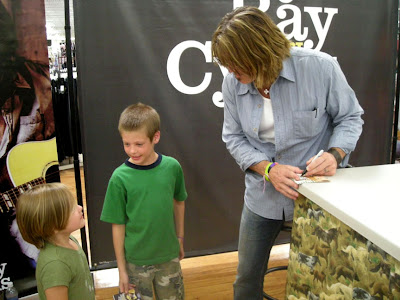 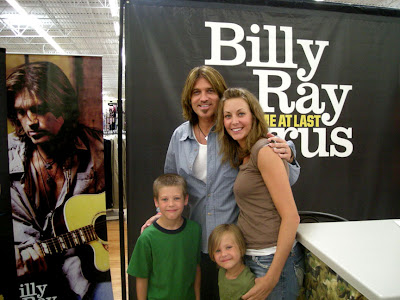 Today was a super fun day because it was the first day that my children have EVER met a celebrity. I'm trying to turn them into the x17online loving person that I am and what better way to do that then taking them to a meet and greet.

Okay, so I'm not that bad. They actually LOVE LOVE LOVE the show Hannah Montana and Billy Ray Cyrus plays her dad on that show. It's a cute show because Miley Cyrus plays Hannah Montana who actually REALLY IS Billy Ray's daughter in real life!
I heard on the radio that Billy Ray was going to be at the Grapevine Walmart Supercenter today at 4 signing autographs and when I told the kids they seriously got super excited about meeting Hannah Montana's dad. We got to Walmart at 3 (an hour early) to sit and wait in a horrendous line that had already formed from the front of Walmart to the towel and bath section. Kora brought her Hannah Montana CD for him to sign and I brought the camera to get pictures with the kids and him, but when we got there, they gave us this paper saying that he would ONLY sign HIS CD and pictures were allowed, but NO POSING. I was a little annoyed because I felt like the kids were going to be ignored, but we still waited. I had to of course go purchase the CD for him to sign and after THREE HOURS OF WAITING, we FINALLY got to the front of the line. It was really cute because once we rounded the corner and we could see him, he started teasing Jake and Kora while we waited for the last 10 min. He would sign autographs and then turn his head real fast like he had caught them, it was so precious and they ate it up!!! When it was our turn, the kids went up to say Hi and Kora brought him her Hannah Montana CD to sign. He signed both his CD and the Hannah Montana one and asked the kids if they liked the show. Kora and Jake were starstruck! I was only going to get a picture of the two of them with him, but the guards who were there urged me to get in the picture too so I did. Afterwards I shook his hand and thanked him for doing this and told him that the kids totally love the show. He complimented us saying I had a beautiful family and then that was it!
As we walked away, a lady grabbed me and said that when we were getting our picture with him we looked like such a perfect couple!! I just laughed but when I told Jake about it, he asked if I thought dad would get mad about the picture. I told him no because dad is WAY cuter than Billy Ray!!
While we were waiting in line, Jake also got to shake hands with one of Billy Ray's sons who was roaming the store. Even though the wait was long, we had a really great time because we made friends with the people in line beside us so the time passed quickly. Billy ray was SO kind and so down to earth, I was really impressed that he was so normal and friendly. It was a lot of fun and the kids are already asking to meet another celebrity.
Here a few shots of us waiting in line, the line behind us and meeting Billy Ray Cyrus.
Posted by Jessica the Jacked LDS at 8:58 PM

Jessica you are like the most fun mom ever! I just don't think I would ever do that......I am never star struck and I hate waiting! I am so glad you guys had such a good experience though!

I agree you are the most fun mom. I wish that I had a mom like you! To be honest I just wish I had been there myself. (A little known secret - I sometimes watch Hannah Montana myself - hee hee, but it is a cute show) I would love to have met Billy Ray.

Wow! you get to meet a celebrity and even took a cool picture together. I have to agree with you that Austin is way better looking then Billy Ray. I admired your patience staying in line for 3 hours, I can never do that. I am so glad the kids had a good time and so did you. Tell Austin ALL the best and we are thinking of him.

This is pretty cool... you're such a devoted Teeny-Bopper FAN!