A BiG surprise for DAD!! 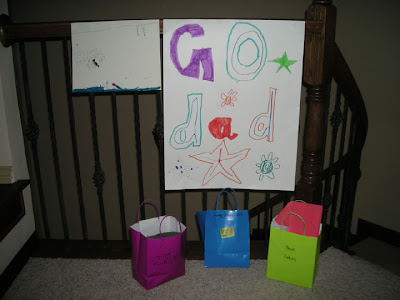 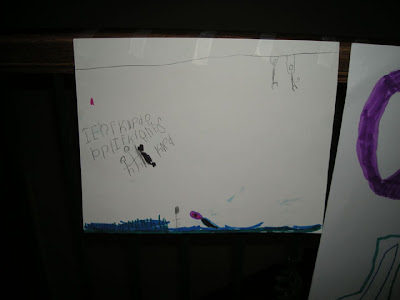 Last night Austin called to tell me he wasn't going to be home until late because he was going to run the route with his dad so I thought it would be the perfect opportunity to gather my punks together and plan a surprise for him when he wakes up tomorrow. We sat in a circle and had a meeting about what would make dad happy and each kid had such great but different ideas, that I decided to do them all!

Jake originally wanted to make dad a badge that he could wear to the BAR, but once we got the poster board and he saw how big it was, he wanted to use it all. He ended up making a big sign as you can see in the pictures, I think it's perfect! He also got some of Austin's favorite gum (bubbilicious) to put in his green bag that he picked out
Kora thought that dad needed a movie, but not just ANY movie. She said she wanted to pick a movie that would send him a message and make him feel like he has "strank" (strength). When we got to the store I picked out about 5 different "strank" movies and out of those, she chose the Rocky set of 5 movies for him. It really was the best choice!
Miah just shouted out that he wanted to get dad a shirt so I helped him pick one out that Austin MIGHT wear (he's really picky ya know).
When we got home from our treasure hunt of gifts for dad, all the kids got busy drawing, coloring, stuffing tissue paper and setting up for the big surprise. We hid all the finished products in the closet so he wouldn't see them when he got home and then at 3:30 am, while everyone was asleep, I got up to set it out for him. It really was a BIG surprise, I don't think he expected it at all. He said everything was so perfect and I wrote him a card that had a really good confidence boosting message in it. I also included a quote from the newest Rocky Balboa movie: NEVER GIVE UP AND NEVER STOP BELIEVING. I thought it went perfectly with the situation!
Here are the pics of our surprise all set up. I took a close up of the picture Kora drew for Austin because it's so precious. She wanted to draw a picture of dad taking the bar and so she drew a monkey and Austin hanging on A BAR, literally. It's so funny that she thinks that's what the BAR is!
Posted by Jessica the Jacked LDS at 8:46 PM

that is so sweet...Jessica you go above and beyond!!!!!

I am sure that Austin loved that. You always think of the best things to do. You are an awesome wife, mom and friend. I really miss you.

that's so sweet. I wanna do sweet things like that with my kids for enos. :) We're still praying for austin and you during this stressful time. miss you and love you.