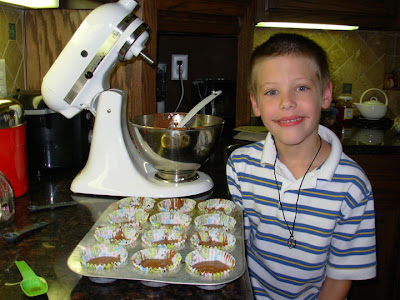 Yesterday Jake decided he wanted to cook something in the kitchen and since he's old enough now to read, maw maw thought it would be a good idea for him to actually make something real using one of her kid cookbooks. In the past, he and Kora would just take random ingredients and mix them together making a disgusting pile of gooh so making something REAL was big for Jake.
He decided on cupcakes and when he was done, he decided he was going to sell them to make some cash! He took his cupcakes out into the heat, set up a table, made a sign and plopped himself down to wait for passing cars. Unfortunately, there are only 12 houses on this street and my parents' house is 2nd to the last so not many cars drive down to the cul-de-sac. I felt so bad for him and his good intentions that I offered to drive them to a nearby community and help them setup shop in a better location that had more cars. Of course by now, Kora was in on the deal so we all loaded up the car and set up in a residence right by the swimming pool. It was SOOO HIDEOUSLY HOT, but Jake and Kora sat outside with their table and chairs and sign waving and trying to flag down every car that passed by. Miah and I sat in the air conditioned car with the cupcakes so they wouldn't get too hot. Every time a customer stopped, Jake would take the money and Kora would run like crazy to the car screaming "THEY WANT ONE!!!!!!". We stayed out there for about an hour I would guess and the kids made a total of about $8 selling each cupcake for 50 cents (where is the cent sign on the keyboard?). Since they did such a great job and got sooo sweaty and hot, I matched what they made so they could each take home $8 and then I took them to their favorite restaurant...The Chinese Buffet.
I was so proud of their willingness and effort to keep selling even when cars would drive by just ignoring their waving arms and jumping up and down. By the way, if any of you reading this have ever just PASSED UP some poor kid selling lemonade or cookies or cupcakes, YOU NEED TO BE PUNCHED IN THE STOMACH because that's what it feels like to them when you don't stop to buy whatever they have. Just do it...it's usually really cheap and it TOTALLY makes their day and makes them feel SO important and grown up.
Anyway, I don't have a picture of the sellers, as much as I wish I did, because I forgot to bring the camera with us and wasn't about to load everything BACK into the car just to drive home and get it. SO instead, you get a picture of the cooker (making a fake smile) but nonetheless...very cute!
Posted by Jessica the Jacked LDS at 9:26 PM

Hey Jessica,
This is one of my favorite entry that you wrote because I am so proud of you for going an extra mile to help your kids feel important and believing in theri effort. Bravo my dear. I am learning from your good example. Yes, I will remember to buy some lemonade from a kids lemonade stand next time I see one. Thanks.

Oh, it's me again. I forgot to tell you that your kid are bless to have a good mom like you.

Hey Jakob, Finally you made something real, blobs of food just sound discusting, but I bet it was fun anyway. My mom never let me put all those ingredients together like that, your lucky! Anyway, great job on the cupcakes! your friend, Jade

I will say it again, you are such a fun mom! Way more patient than I am, good job! I think right now my kids think that stress is what keeps the world moving daily, this post reminded me that I need to let them be kids sometimes. Thanks Jess! love, Tara

i agree with everyone, you are such a great mom. i probably would have said "let's have a cupcake eating contest instead!" and then everyone would have ended up puking. hahaha....

this is such a sweet story... i miss my kora and jake. So motivated.... what good entrepreneurs...i will NEVER just drive by little people aGAIN without buying... i would have bought the whole batch!!! good job jake in making the cupcakes!!!!

That is so nice! I'll bet they had a blast out there selling cupcakes. I most def would've stopped for one!

By the way, your blog is so fancy. How do you do it? Mine is totally lame.

I hope that as Faith gets big enough to want to do these kind of things that I am as eager and patient as you are. Your kids have always been so creative and think of some of the best ideas, of course they have to get it from somewhere(hint, hint). I will tell you too that anytime Kyle and I drive through our neighborhood and see any little kids with their little stands on the corner that we always stop!