So I found some pictures on my mom's camera and decided to steal them to use on my blog. I was beginning to feel like my viewers were getting bored just reading my stories. Sorry to use them all up in one post, but I couldn't wait! Please EnJoY! 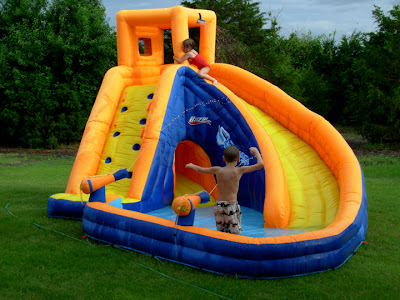 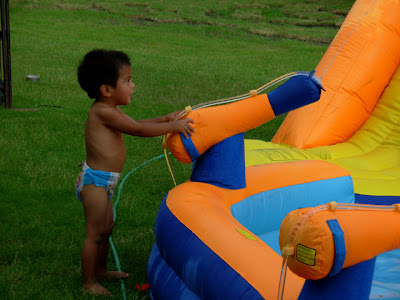 This is the bounce house/water slide/swimming pool that my dad bought for the kids this Summer. They LOVE LOVE LOVE playing on it and their favorite thing to do is climb UP the slippery slide which can become quite a mission as you can see Kora hanging on for dear life at the top. Miah is scared of the whole thing, but we managed to thrown him down the slide about 20-30 times to get him used to it (it didn't work). He WILL of course use the water guns to spray Jake and Kora, just make sure the water doesn't touch HIM. 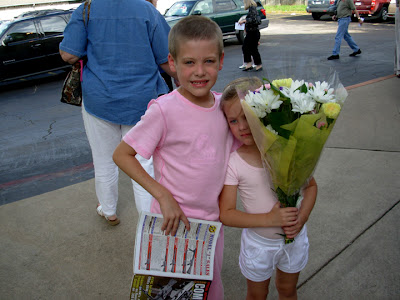 Here's Jake and Kora right after their performance at CATS. They took a two week class and each worked on different performances which they did for all the families on Friday, June 22nd. Jake's show was called The Wonderful World of Wilbur which was like a part 2 of Charlotte's Web. Jake played the part of Wilbur which would explain the pink little number he's sportin. He did a fantastic job and remembered all his lines. He was the only boy in his class, but it didn't bother him a bit. Kora's show was called Fairy Tale Travels and they made up a story about Princesses, Fairies, Witches and Princes. Her whole class was made up of about 13 girls and EVERY single girl wanted to be one of the Princesses. On the day the teacher assigned the roles, all the little girls came out crying to their mom's saying that they wanted to be the Princess. The teacher was trying to explain to all the girls that not everyone could be a Princess and there were only 3 princess parts. Well, Kora comes out of class with this straight face looking all mad and says to me in a angry voice, " I'm princess number three, but I wanna be the dragon!" Leave it to MY child to complain about the part that everyone desires! The day of the show, she kept telling me that Mr. Gordon (the teacher) told her to wear a dragon costume to the show and to wear dragon makeup. It was funny because she was so serious and would have really come as a dragon if she could have convinced me to make her over as one!! Anyway she did a great job as Princess number 3 making faces at me and Austin when she was on stage! (crazy woman.) We also found out at the performance that there was no dragon part and she had made that whole thing up anyway! At the end of the show, Austin got a Combat Arms magazine for Jake - he's a gun freak. Kora got a big bouquet of flowers from Daddy and as you can see from the pictures, it was her first bouquet of flowers and she wasn't quite sure what she was supposed to do with it. 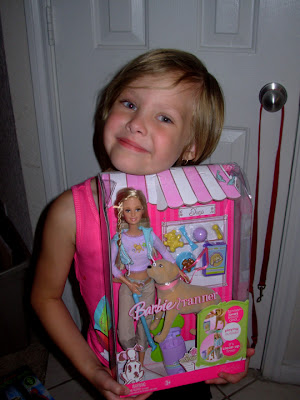 I have always been so fond of my years of playing with Barbies. I was always so imaginative with them and would make up full length soap operas almost that would continue from day to day as I would get home from school. I loved my Barbies SO much and I couldn't wait for the day that Kora showed an interest in Barbies. Finally, it happened a few weeks ago when she had a little cash and wanted to spend it at Target. With no persuasion from me at all (really, I promise!), she chose to buy her very first Barbie and I couldn't help but take a picture of her with it. Hopefully it's the beginning to a long life of Barbie fun! She did of course have to get the one with the pooping dog...leave it to Kora to pick out the most vulgar Barbie. 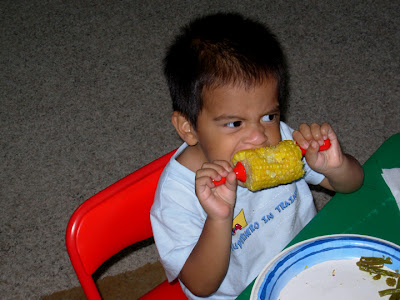 Here's a sweet picture of Miah diggin' into some good 'ole corn on the cob on Mother's Day. 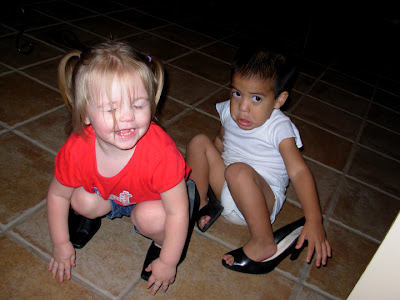 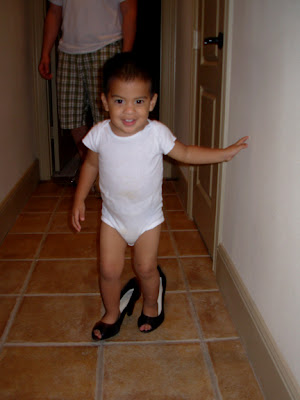 While over at my parent's house for Mother's Day, the little kids all decided to raid Maw Maw's closet and have a high heel fashion show. Don't they look precious? For those of you who don't know, the sweet little girl with the piggy tails is Miah's cousin Lauren, who is my sister's daughter. They are SUPER favorite cousins and she's probably the only kid Miah's age that WON'T let him boss her around...which I like! 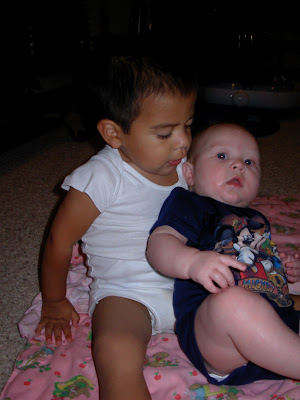 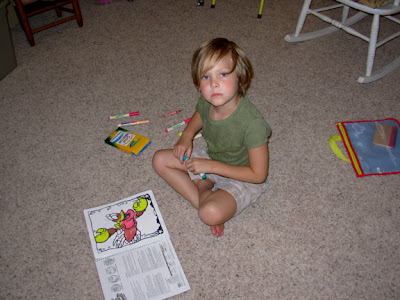 On the day we moved in with my parents, we found Kora in her new playroom coloring so diligently and blasting her Disney Princess CD. Too bad you can't hear the music, because that was a big part of this precious picture, but you get the point. 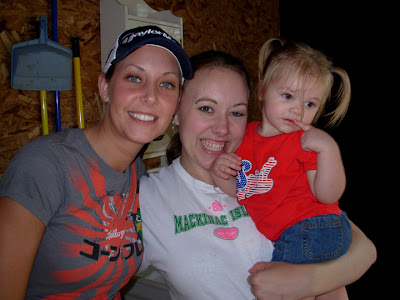 This is me with my beautiful sister Amy and her daughter Lauren. I don't have many pictures with my sisters so when I saw this one I had to post it to introduce her to all my faithful viewers. 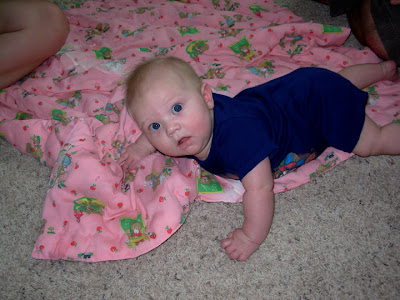 This is my sweet baby nephew Aidan. The thing I like about this picture is that he is making a "David face". You won't get that unless you know his father, David. Come to think of it, I'm not 100% sure this IS Aidan...it could very well be David...who knows? 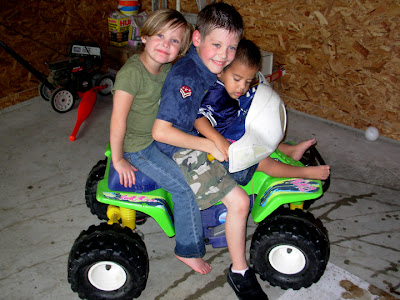 While we were busy unloading boxes and unpacking at my parent's house, the kids were busy riding around on the 4 wheeler. The only bad thing about this picture is that it makes me wonder where another child will fit if I have more? We can't leave them out!
Posted by Jessica the Jacked LDS at 11:29 PM

such a cool pool/slide, can we come over to play? i loved the picture of all three kiddos on the 4 wheeler and miah in his gramma's heels.

I don't even know what to comment on, every picture looks so cute! You look gorgeous as usual, the kids look like they are having so much fun! I love Miah in the shoes, totally classic! Fun times!

Love the blow up slide thing...Ty would have a BLAST on that! And the high heel shoes...yeah, Ty likes to do that too! Cute pics!

wow... i wish WE had had one of those bouncy water slides when we were little. I bet it's a LOT of fun. For the first time in the picture with Kora and Jake after their plays... Kora looks JUST like you behind those flowers. I've never seen her look like that. It's really sweet. I love Miah and his corn. Such an angry corn man. Great pictures but you'll be sorry when you don't have any for the next post!!! i know i will be... :(