A list of Junk for YO MAMMA's Bizunk (I dunno what that means it just sounded good.)

1. WELL.
Today was the day.
Let it be written, let it be known that on December 17, 2009, the Lowe Family officially closed down their baby making factory.
This poor guy went in for the snippage today and it HAS been done.
Wait, no...
Not that guy. He was the cause of this hasty decision. 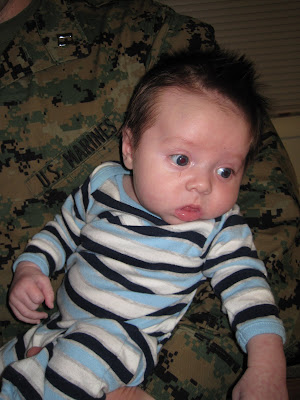 There we go.
THAT guy. Sorry, too close.
He's laid up in bed moaning and groaning about some pain or sumthin like that.
Whatever.
I seem to recall a time when I had,
Oh what's that called?
Hmm...
OH YEA...
NATURAL CHILD BIRTH.
BaM!
There ain't no toppin that one.
I'll use the words of a dear friend named Aubrey,
"At least they aren't cutting him open and demanding him squeeze a human being through there."
He's tough, he'll get over it.
In the meantime, I'll be bringing him frozen peas, yummy drinks and snacks and pain pills in bed. 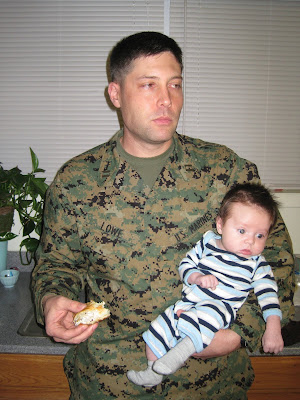 2. TODAY IS THE LAST DAY!
Enter HERE for your chance to win a pair of Serindipity's Ankle Biters.
Contest ends today at 5pm EST.
COME ON!
You know you want to, don't be shy. 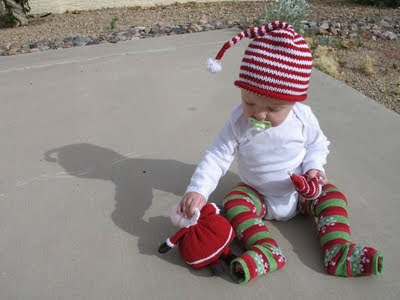 3. Here's a phone call conversation I had with my mutha today.
ME: Hello?
Mutha: Hey Jessica! Listen I'm at work and I need to know if you can tell me how tall Miah is or how tall Kora is. I have a family who's child died and I need to know what size casket to order. (My mom is a mortician/funeral director if you didn't know).
ME: Uhmm, I don't measure them regularly, sorry. I don't know their casket size off the top of my head. I'm not really expecting them to die anytime soon.
Nice right?
Dear Mutha,
When you call me wanting to know what size my kids are so you can figure out what size casket they'd use, it kinda makes me sick to my stomach. I don't usually like to try imagining my children in caskets. I think it's bad carma. But, whatever. I still love you.
-Jess 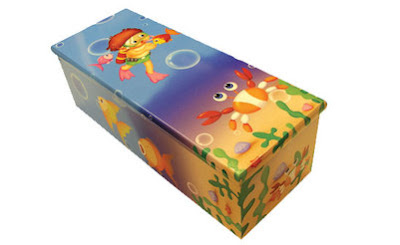 4. So my child is a quitter.
I've always been one of those parents who tell their kids, "You have to start what you finish. If you try a new sport and you don't like it, you HAVE to finish the season. At least you know you don't want to do it anymore, and you didn't quit."
Well, I lied.
Kora signed up for cheerleading a few weeks ago. I was against it the entire time but she REALLY wanted to do it, so I allowed.
Well, she's bored. She thinks it's stupid and really really boring.
She does absolutely NOTHING. It doesn't help that the coach looks like a homeless woman and has them do the same ONE cheer OVER and OVER and OVER.
So after this game, I let her quit.
In the video, each girl had a turn to say their name and then say what they loved to do.
Most said things like, SPLITS! or JUMPS! or DANCE!
Then it was Kora's turn. And if you can't hear her, she says,
"My name is Kora and I like to READ!"
Phew...
Her future is brighter than I thought.
http://
5. Last week the kids had planned to go camping with Austin but the weather dropped a TON and it was WAAAY too cold for them to make the trek out. Austin felt horrible because the kids were super excited about it.
So instead,
We set up the tent in the living room and the kids camped in there.
It reminded me of when me and my sisters and friends used to camp in our front room.
Good times. 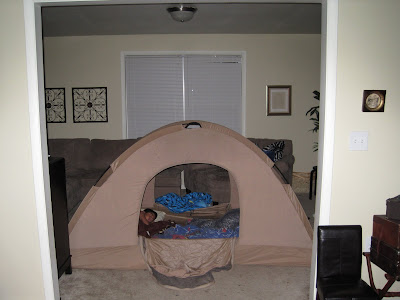 This is Izey finding the kids in the morning and realizing he was left out of all the fun. 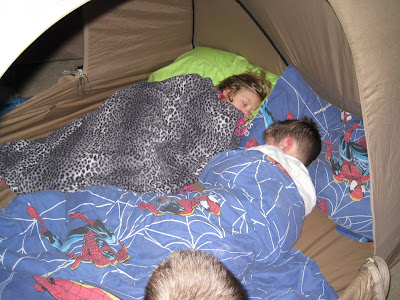 Neked Miah.
(I spelled that wrong on purpose Bonnie and Kathy. I'm Texan) 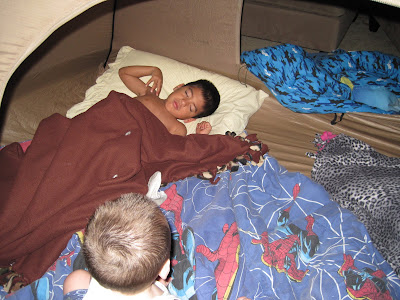 6. This is what the babies do in the kitchen every night when I make dinner.
Izey puts on a concert/dinner for Gus. 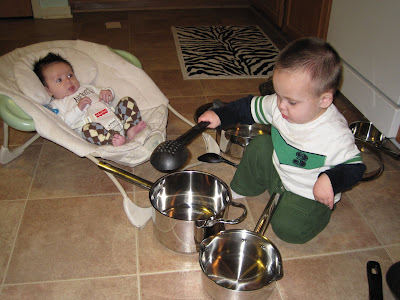 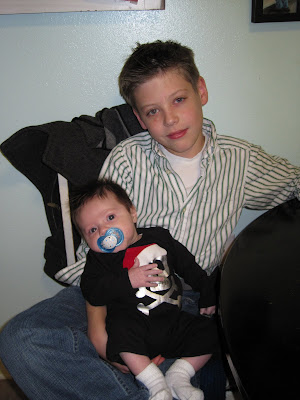 8. This entire week the kids had all of their Christmas programs at school.
Unfortunately, Miah's and Jake's were at the SAME EXACT TIME on the SAME DAY.
Blah.
So I put on my Supermom cape and made it work.
I wrapped my little man on my chest and grabbed Penny in my arms and RAN into Miah's school (they don't allow strollers...stupids) and watched the first half of Miah's performance.
I took a picture.
Waved.
Clapped.
And then threw him a little thumbs up sign with an 'I love you' sign to follow, after which I waved goodbye.
Then I was off...
RAAAAAN to the car, pulled out my Phil and Teds, threw the babies in the stroller and ran next door to the NEXT school making it in time for the LAST half of Jake's performance.
Nothin like seeing your kids face light up as they scan the room and find your face.
A face they thought wasn't gonna be able to pull off BOTH performances.
I took a picture.
Waved.
Clapped.
And then hugged him goodbye as I left to throw the babies in bed for naps!
Am I freakin Superwoman or WHAT?
No wait,
I wanna be WONDER woman.
She's hotter.
There's Miah. 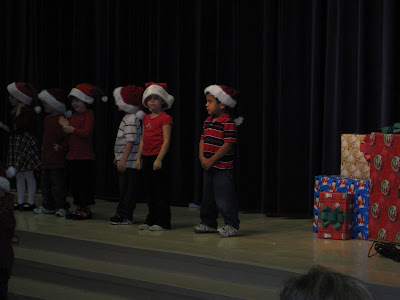 And Koko in the very very center.
Do you see her?
Yea me either...
Prolly cuz Gia's hair was all up in my face as she kept fluffin it.
Yea that's right Gia you SNOB. Thanks for saying hi to me. 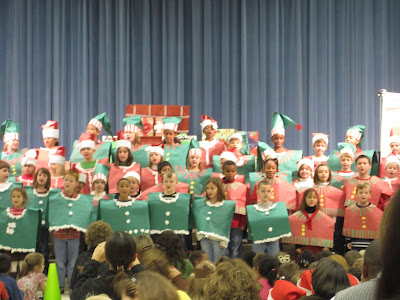 And then Jake's poem which you can't hear AT ALL.
Don't even bother clicking on this.
It's shaky and noisy and CRAP.
That's because I'm holding two babies at one time.
Hey, I tried.
http://
And Jake with his teacher that he LOOOVES so much.
She's so sweet :)
Isn't Jake cute? My gosh. As soon as he gets braces he is SERIOUSLY gonna be melting some hearts. 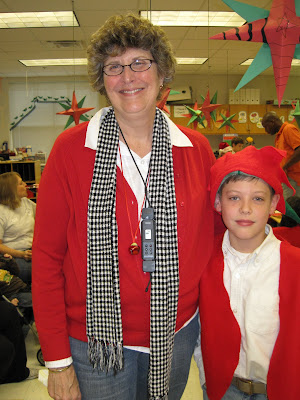 And Jake with his best friend Christopher.
His dad used to be the MAGISTRATE.
Don't you like that word?
Makes me think of a dark blue cape with a high collar and a wand with a star on the end.
I wish I was the magistrate. 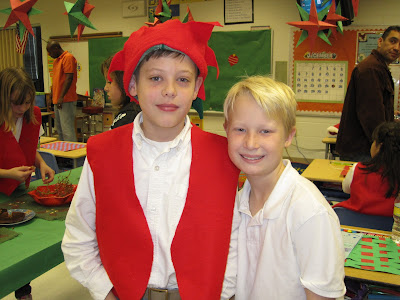 you are WONDER WOMAN;) And at least penny is playing not grabbing the babe or grabbing ur leg and whining and crying like mine! heaven forbid he actually think pots and pans r fun?!

Woohooo for camping inside! Wish I had a baby so I could sign up for that giveaway .. I might just do it for my future babies though. :D

was thinking of visiting ya'll to get caught up. thanks to blogs, now i won't need to. Klyde, you are very efficient. M.A. (well, maybe i'll stop by to see Austin).

You never fail to make me laugh. And YES, you are superful wonder womom...er, woman. Seriously, ALL that and babies down for naps too??? I can't seem to make it work with ONE kid. Instead of She-Ra, I might be She-blah. You got me beat.

It's spelled karma and you should be nice about your mom.

way to quit kora!!! i'm PROUD. stupid cheerleaders. oh.. and mother called me to ask LUCAS' size too for the exACT same reason... he just got here!!! why are you trying to send him off to heavenly father again!?!?! poopstain. and yes.. you are a good mom.. one of those that i look to for good mothering skills. :) no... for SERIOUS!! tell your your babies and lover that Ni says hi....we'll all be together soon enough.. oh.. and tell austin to gain some weight... he's looking gaunt. mean marines!!! seriously? ten pounds? sheesh!!

Your kids are so cute!! Jake looks more and more like his dad, and I'm sure you'll take that as a compliment! lol! Kora with the cheerleading is so cute! That coach looks very scary, what is up with that? Anyway-thanks for the laugh-

Congrats on the snippage! Your birthstory was awesome, my #4 was au natural and it was awesome (although it took me a while to think that!)

I had more to comment on, but my brain is leaking