Rolling out the red carpet for junk!

1. Oh no wait, that's just a toilet paper roll that Isaak has decided to roll down the stairs.
Nevermind.
This IS his new favorite pastime though. We have to make sure all bathroom doors are closed so he won't go fishing in the toilet (which probably hasn't been flushed), roll out the entire roll of toilet paper, or open the cabinets and pour every kind of bottled liquid into a big gooey pile to roll around in.
He has, BTW, mastered the stairs...
UP
and
DOWN.
So thanks for your gate Amber but I'll be returning it now since I'm moving to a one level house in FOUR WEEKS!!! 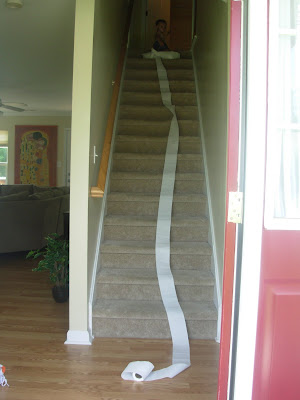 2. We went to one of the base parks the other day to kill time while Jake was at football camp. OH YEAH, did I tell you he did football camp? Apparently the kids in football camp don't like sweet skinny boys with freckles. One tried to fight him.
AND
Apparently the white trash parents who PUT their kids in football camp LIKE watching kids fight because while I was entertaining Penny, Miah and Kora, Jake was getting into a brawl that I had to RUSH over (pregnant, sweaty and carrying a 25 lb baby) to break up while all the other parents just sat around and WATCHED.
Stupid.
Anyway.
Back to the park.
The kids had fun pushing each other.
WHY?
Cuz I'm a pusher Caty.
I PUSH people.
Sorry.
Tangent.
If you can name what movie that was from I'll send you some junk...
First person!!! 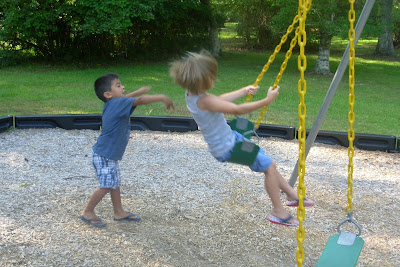 3. Penny LOVED the swing. I got some cute video of him smiling as he flies back and forth but it makes me a little car sick to watch and I didn't wanna make you guys vomit.
Trust me though,
It's precious :)
(Oh, Amanda did you ask me where I got this R2 shirt a while back? Did I answer you? Can't remember. Anyway...I got it at The Retro Baby. They ROCK!) 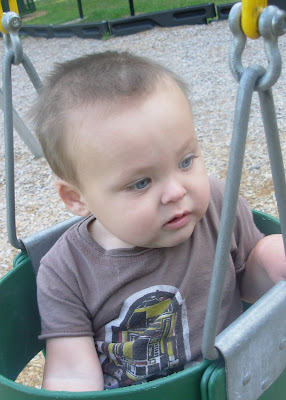 4. Penny loves swimming in the baby pool at the O Club. He loves swimming period but if you try to hold him in the bog pool he just wants to get away and do it himself, which of course, isn't a good idea. SOOO, the baby pool satisfies his urges to be a big boy.
OH wait!!
Do you see sexy Gia on the side?
No that's right,
you don't.
Wanna know why?
Because she always flakes on our invites so she isn't THERE that day.
OR
any other day.
Whatever. 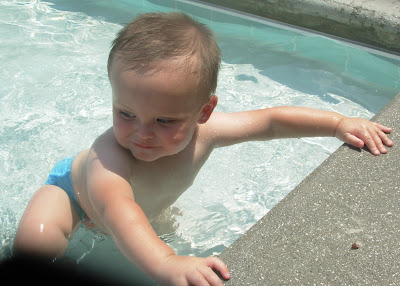 5. Another one of Penny's control issues involves holding his own food. He HATES when you put stuff in his mouth and he hasn't had a chance to fully inspect it to make sure it's yummy and not healthy. I hate when the Lover does that to me too so I understand.
He likes using a fork to stab his butter toast because he feels in control.
What is it with boys and their mouths?
Austin and Jake make this same face when they play video games.
Like it helps to have your mouth open? 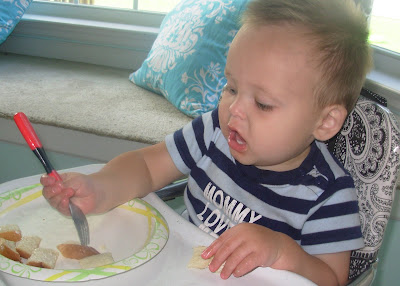 But sometimes he gets annoyed when it won't stab so he just picks it up and pushes it on the fork. 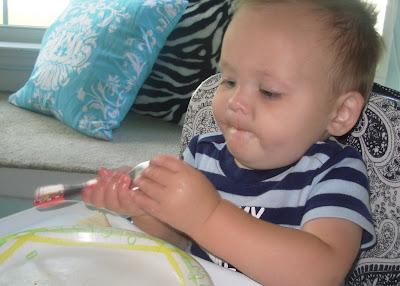 6. I got an idea. How bout this WHOLE junk post be about Penny? Yea, I like that.
Penny has also been working on his walking. He doesn't do it often, but when he does, he's really good at it. I'm planning on perfecting it when we visit MawMaw and PawPaw.
See my sexy shoe!? We were about to leave for church so I'm sprawled out on the floor sitting very un-lady like with my dress on to get this shot. Aren't you glad you can only see the shoe? 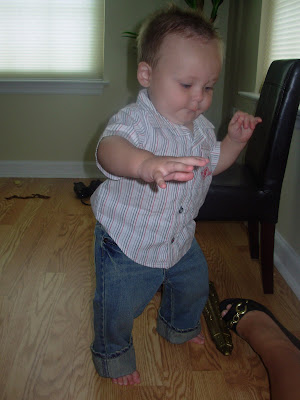 7. These are my terds who can't smile on cue for anything. They're laughing because I just yelled at them about it. Not Miah though. He takes everything too seriously and is worried he's getting a spankin after this picture is taken. 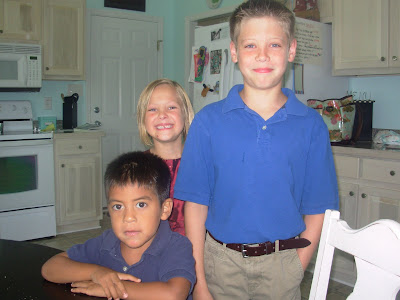 8. Back off girls...
He's ALLLLLL MIIIINE :)
This is my hottie all ready for church.
First time wearing jeans.
You know how I am about putting jeans on my babies...it drives me NUTS.
But just this once, I had to indulge in his cuteness. 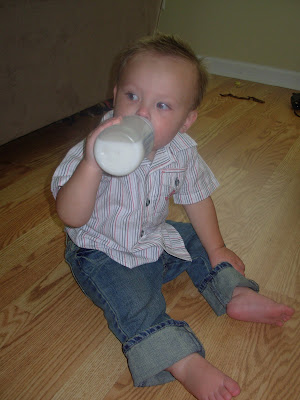 Posted by Jessica the Jacked LDS at 6:40 AM

I love how SPIKE is at the top of the stairs looking down at you while you take that picture. Did you get a picture of him once he fell from the top all the way to the bottom of the staircase? That would've been the one to post.

Penny is so freakin cute! The jeans are adorable..did he wear those to church haha? And you may be jealous of Miles walking but I'm totally jealous of Penny's love for swimming..Miles freaks out in water..even bath water what a pansy.

I love Penny in jeans. He looks so handsome! And I can't believe you've caught him walking and I haven't caught Noah yet. Oh, well, we've been sick. That's my excuse.

And those parents not stopping the fighting.. that's ridiculous. I hope you gave them all dirty looks.

you win amie! now who are you? amie douglas? email me with your info chicka.

I love the jeans! He looks super darling and ready to be a big brother! I like that you had to go outside the house to get the picture of him at the top of the stairs but if you can lug a 25 lb baby to stop a fight I bet you would be able to catch him before he hit the bottom.

My dad always says "no denim at church". My 15 year old self is super jealous of Penny right now! He's hubba hubba.

Your babies are so cute...all of them. Anyway, thank you for the message today!

I have a long way to go before I am a pro like you at blogging! I love reading them everyday!

Drop by if you have time while in Rockwall!

I too have strong opposition to jeans on babies. How FREAKING uncomfortable to sleep 18 hours a day in denim. sheesh. Now do I need to lecture you on bottles for babies over 12 months? heehee.

Penny is adorable in jeans! I hope you made sure to comment in a loud voice for the stupid white trash parents to hear that it is inapppropriate to fight and only ignorant people do it. :)

I love the jeans.. football in NC.. you should tell them you are from the capital of football.. Texas.. and that they wouldn't last here white trash and all..

OH my gosh! I can't believe that parent just sat there and watched! What a freaking tool, some adults just need to be taking into the bathroom and spanked.

Dangi it!!! I knew it was Mean Girls! Anyhoo... What's up with all the rhetorical questions. I think ever paragraph had one.

By the way, did you punch the fat chick watching Jake get attacked, holding up her ghetto cell phone recording her daughter get b*#$@ slapped by her nasty boyfriend. Huh?!

Wow, Penny doe look very manly! Too cute. Sorry about the moms in Football, if that is what we call them. Austin was at hockey practice one day, and some kid to his hockey stick and started to hit him across the chest. No one said any thing until Chris started Screaming at the coaches to get that kid off of my kid. Crazy sprots parents.

I am confused at SS's comment regarding no denim at church... I thought that DK HAD to wear denim to church. Also, I take back what I said abt your blogs being boring, I read this one and laughed about the boys and their mouth breathing. MA

I looooove babies in jeans!! SO CUTE!