How the trip started...

So the kids and I left Sunday afternoon ready for our 2 hour drive to Raleigh, NC to catch our flight out to DFW. Penny was great the whole drive and the other 3 just watched two movies so everyone was happy. On the way there we saw a big sign apparently advertising for a TBS friend of Austin's. Jones' Sausage. I had no idea he was so open with his parts. This isn't the worst of it. The one before this said, Jones' Sausage 1/2 mile. Yikes... 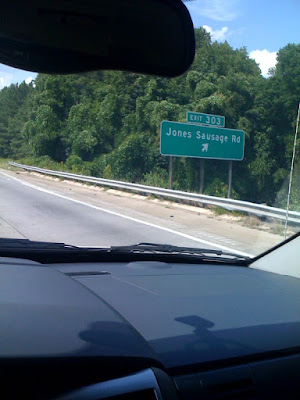 And I also saw a licence plate with my favorite acronym on it.
WTC?! 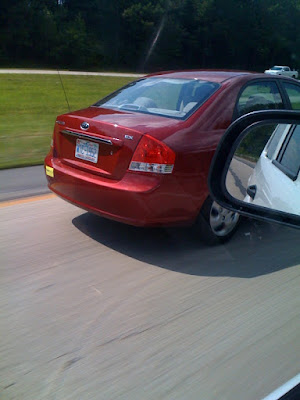 Getting INSIDE the actual airport was a tad bit interesting. I had to...
pull up to the terminal,
keep the kids in the car,
take Penny out to change him in the back so I could use his diaper rash ointment one more time before having to pack it up since it wouldn't be allowed on the flight,
empty all our garbage from our lunch so no trash would be left in the car,
take out our two bags and check them,
fight the crazy traffic of people giving me dirty looks since I wasn't really dropping anyone off and I was changing diapers while people were waiting,
drive a few miles to the park and ride,
unload all the kids,
put Penny in a stroller,
make sure all the chickens had their blankets and bags,
leave a note for Debbie Kelly and a secret package for her,
make sure I remember where I parked,
haul the kids to the shuttle station,
jump on the shuttle,
make sure everyone has a seat even though we aren't all together,
snap my fingers at Miah so he'll stop getting out of his seat,
feed Penny a dissolvable Benadryl so he'll pass out in time for the flight,
wait for our stop at terminal 2,
and then fight the on comers to get off without losing any of my children.
WHOA.
After all the driving and mess and craziness we were ready to just board our flight.
BUT, the flight wasn't ready for us.
We find out we're delayed TWO HOURS.
CRAP.
That benadryl is gonna kick in any minute and I'm still gonna be at this stupid airport.
Our gate is packed with people who are already annoyed that they have to now wait two hours longer. I look at my rowdy overly excited kids and realize that I need to figure something out quickly before this snotty Jesuit family starts giving me even MORE dirty looks than they already have been. 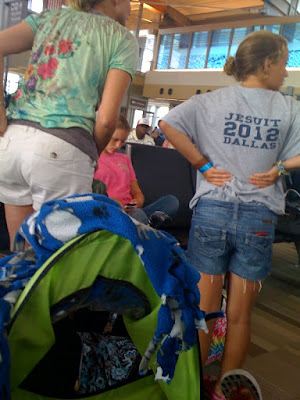 I grab all our stuff and move the kids to a section of the airport that's empty so they can run like maniacs and not bother anyone. I called my Summer Sister to keep me company for a half hour. I got some nasty looks from the passerbys as I sat on the phone and let my kids have races but my SS told me I shouldn't worry about it. She gave me some good ideas to keep them entertained.
We got on the fast moving floor and went
UP
and
DOWN
over and over
doing a different trick each time,
My favorite was when we had to keep our eyes closed the WHOLE time so we wouldn't know when the end was coming.
Can you picture us?
I wonder what everyone around us was thinking. 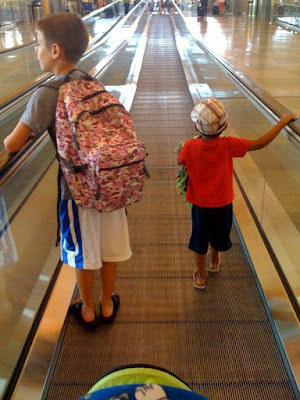 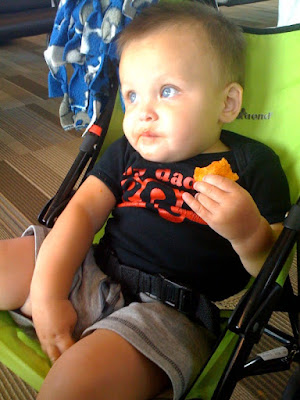 We watched planes land and take off. 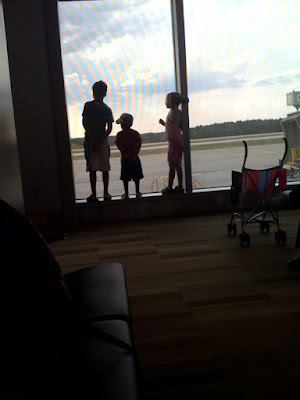 We played with some cheap carnival toys that were WAY over priced. 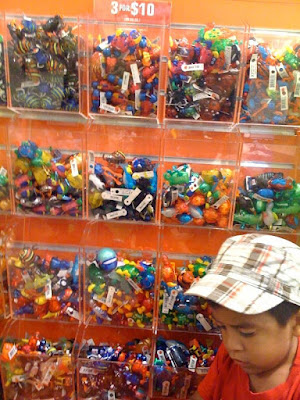 Penny ate them.
And then stole them. We found them in his stroller after we left so we had to return them to the store and tell the worker what he did...which was another fun event to buy our time. 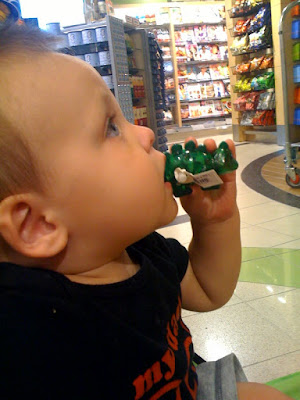 After some yummy root beer floats,
FINALLY, we boarded.
We were on the very last row and the airline lady girls were sooo sweet and understanding. They continued to check on the kids and offer them drinks and blankets and pillows.
Penny screamed
BLOODY
MURDER
for five minutes straight.
The lady in front of me kept peeking through the seats giving Penny the stink eye.
He didn't care.
His Benadryl was LOOOONG overdue so I swaddled him tightly and he passed right out...
for the WHOLE 2 1/2 HOURS!!!
Thank you prayers!
I was even able to get up and go pee about three times and I just handed Isaak to Kora and he kept sleeping. SOOO perfect!
Jake ended up sitting by a kid his same age and they talked and played games the whole time so I didn't feel bad that he was all by himself. 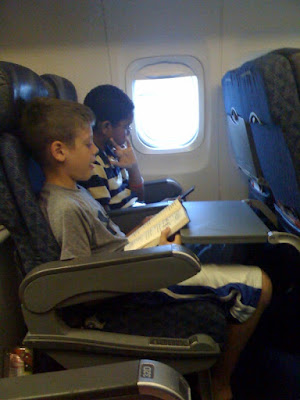 At almost midnight, we finally pull up to my parents house.
PHEW! That was a long day.
The next morning, the kids didn't waste any time throwing their swimmers on and jumping in the pool, bad breath, messy hair and all!
Jake and Penny played in the Bobcat like real builders. 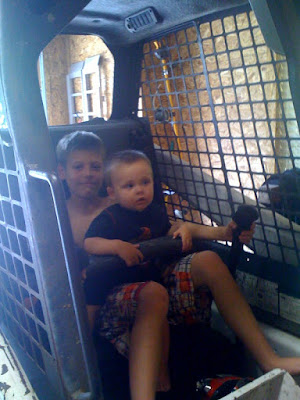 I spied my favorite part of being home.
No, not the kitchen.
See that tiny little section up high and to the right? 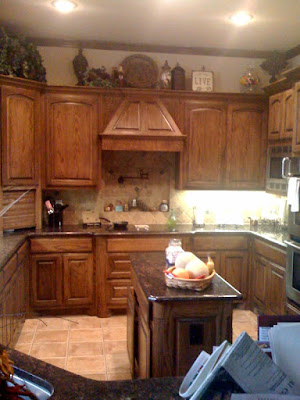 Let's go in closer.
YEA, that. The big jar of gumballs. 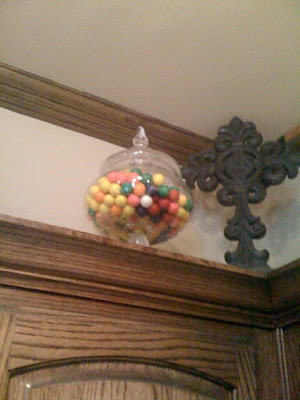 I couldn't resist.
I climbed my big pregnant self up there and grabbed one or two...
or seven.
They should all be gone before the week is over :) 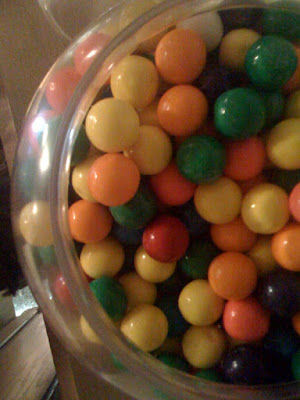 The kids are LOVING the pool right at their fingertips. 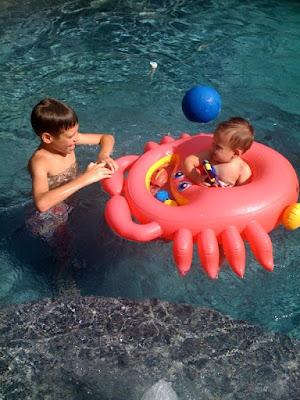 They spend the days taking turns going down the slide and jumping off the waterfall.
Jake, 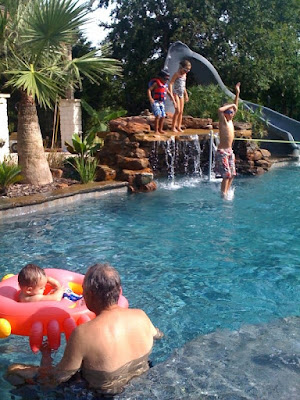 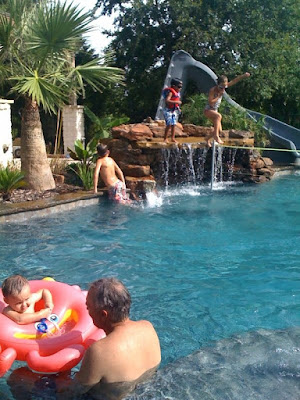 and yes, even Miah! 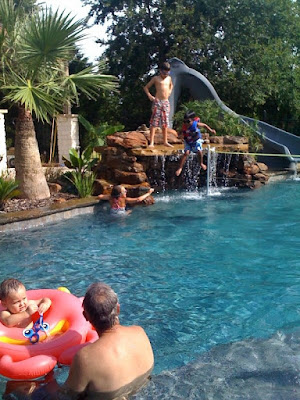 Penny roams around either swimming or digging up bugs to eat.
When he gets too tired of his yoga, 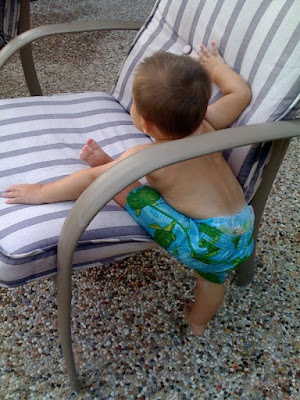 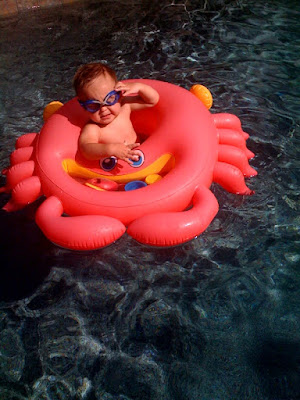 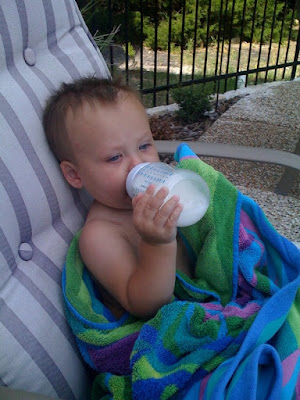 And so does mom.
More good times to come!
Stay tuned!
Posted by Jessica the Jacked LDS at 9:48 AM

What an adventure! So glad you made it safe and sound. I love when people give you the stink eye when you are clearly stressed and trying to get things under control. I hope I am never so old that I can't remember how awful it is to have strangers glare at you as your baby is screaming.

Glad your flight went well :) And Penny is a doll in those swim goggles...and stealing stuff, what a cutie!! The pool is beautiful. It's going to be hard to leave.

I am glad the poop is gone! Sounds hectic...glad u made it w/o too much drama:)

Only you could have such an adventure at the airport! I'm glad you and Penny are getting rest, I can't wait to see more of your fun times. :)

Man you are amazing! Def. SUPER MOM! I keep saying well good thing I'm losing my flight benefits when I have two kids b/c I don't know how I would travel alone..but you inspire me! And dang is that your parents house that is really nice. What a nice vacation you deserve it!

You did quite well for yourself missy!! I'm glad traveling went well! I don't know how you do it!

Fun Fun FUN! I love that pool, it makes me wish I was in Texas on Friday! The kids look like they are having a blast, so I guess the crazy airport drama was worth it! Keep us updated!

Oh, and please don't use yellow for your font. I have a headache from trying to make out "lady girls."

It looks like you are having a fabulous vacation! Plus kudos to the time wasting in the airport. I love riding the moving sidewalk...maybe I'll plan a long layover just so we can play. :)

YIKES. you lived through my nightmare--the flight delay. We journeyed yesterday and got plenty of stink eyes too. Especially from the old couple behind us. WTC--they've never had kids before? Call us--we need to hang out.

why is everyone so disgusted by poop? everyone does it. come on. get over it. it's POOP! not dead bodies mangled all over the freeway.. (that was months ago) also.. i'm glad you had fun in your WARM water poop.. i mean pool. i'm jealous. i wish i was there with you guys.

I think we rode the people mover about a thousand times trying to entertain Paddy when we went to Alaska!! He loved it!

oh.. and one more thing... jesuit= judgemental. i can't believe that lady kept peeking between the seats.. like really.. you WANT isaak to keep crying right? what a bee-yotch.

Thanks for leaving the area this week. It has been nice to be with my friend SS. Also, she gets more done when you are not around. MA

What is a jesuit? Anyone want to help me out with that one?

jesuit is an all girls private school in dallas that's REEEAALLLY expensive. most of the north dallas families that go there are super snobby..but not all. in this case...yes, they were giving me the stink eye.

HECTIC! But look where you get to relax now! AWESOME!

I jUST got five minutes to catch up to you. The trip looks like it was FUN and cozy and happy. That pool rules. I can't believe you moved away from that just to be with your lover. I can't wait to hear more of the good times IN PERSON! xoxo