1. HAPPY BIRTHDAY ISABEL!!! Today happens to be Amber's oldest birthday, Miss Isabel! She and her lil brother Ian who is so scrumptiously yummy and cute spent the night with us last night. For breakfast I made heart shaped pancakes to celebrate the day. I had to make sure they were perfect because Isabel is a punk and she was criticising me the whole time. I was worried she'd gag and embarrass me but she didn't. In FACT, she asked for seconds! Ahh Yea. 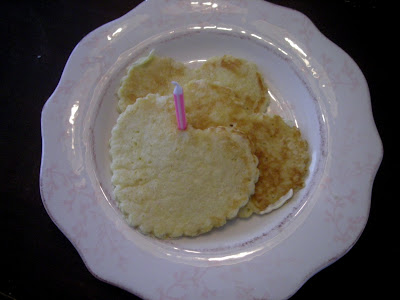 2. The girls spend the entire night AND morning dressing up in princess and Hannah Montana outfits. It was quite the scene. Austin was thankful he only has ONE girl because they're loud too...very loud. 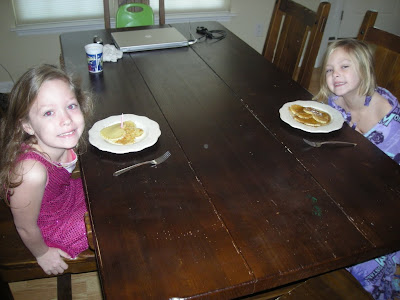 3. The boys had heart shaped pancakes on spider plates. 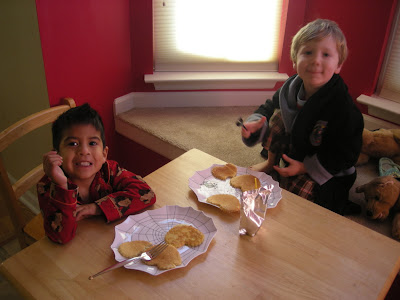 4. Today I went antique shopping because I found some awesome chairs on Lejeuneyardsales.com which is like a mini craigslist for just this area. It's AWESOME!!! I already KNEW about it, but didn't really know how it worked so when Heidi and Summer explained to to me yesterday I went home and quickly became addicted.
5. I found 6 dining room chairs total for my new black pedestal table that's coming this week. I really wanted white chairs for it like Molly has but they were $99 a piece. I know that's still a pretty good deal, but I wanted BETTER and I knew I could find it. I found some at Walmart.com that were really cute too but they were $180 for a set of two. I bookmarked them and decided NOT to buy because maybe just MAYBE I'd find something better. LO AND BEHOLD my friends...I DID. I found 4 at one little antique shop and then two more that are almost identical to the 4 at another shop. They're all white, wooden and ADORABLE with padded seats. I'm going to need to do a little work on them but not much because they're already re-finished. I'll just add some paint on a few and re-upholster them with some fabric to match my inspiration for the kitchen decor. This will be my first home job EVER. Like, I've never re-done anything so it's really exciting! I figure if I just take apart the upholstery REALLLLY slowly then I'll know how to put it all back together with new fabric...right? I learned this amazing "teach yourself" talent from my dad who is always tinkering around with stuff. So if he can do it, I can do it. I'm not gonna show you the chairs YET because I want them to be a surprise. But don't worry. I'll take before and afters. OH and I almost forgot the best part...I got each chair for less than $40 a piece!
6. ALSO in my chair adventure today I bought two dark brown covered leather chairs. I only needed one but they came as a set and the price was so lovely even for TWO that I went ahead and took them both. I'm going to use them in the family room to go with my computer armoire that's on it's way.
7. The boys are all fighting because of a dumb board game so as much as I hate the number 7, I still need to go. OH and "the boys" meaning Jakob and AUSTIN. Yes...competitive much?
8. OH WAIT! I forgot about this picture of two of my boys doing homework together! Yay! I don't have to end on 7! 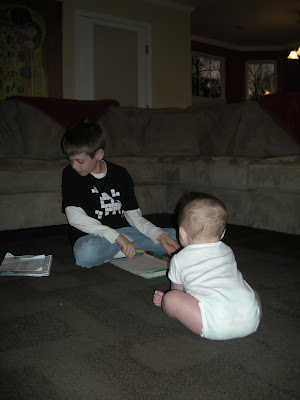 Posted by Jessica the Jacked LDS at 1:05 PM

Love you and can't wait to see the chairs.

Thank you for watching the kids last night! Too bad that Matt was feeling so bad and we didn't get to take advantage of the kids time away....next time!

Thank you for making Isabel's birthday morning so special...thank goodness you didn't burn the sweet pancakes!

I can't wait to see the chairs....do you need any help? You know where to find me:)

Oh, and that is a really awesome carpet on the floor in your living room...is it new?

LOVING those canisters - what a great inspiration to start with. I love how you are sharing your process of design....it is fun to follow!

You got a present for your 10th anniversary AND the computer armoire!?!?!?! That is SO not fair! Here's my only advice on your chairs, once you take them apart slowly, iron the old fabric so it lays flat, tape some paper together trace around the ironed old fabric and make a pattern to cut the new fabric. Good luck, can't wait to see the finished product!

okay so reupholstering chairs is super simple! don't get too stressed... it was the funnest part of redoing our dining room table and the COZIEST because we added extra padding. i'm excited for you!!... it makes me wanna do another home project... well.. as soon as i can move around normal again. Oh... and i think that Izey is a good kitty cat. He just sits and waits and watches and then loves to be cuddled on YOUR time, not his. It reminds me a little bit of Kitty Boy... aww... kitty boy. Give Izey a hug for me... i know he needs one.

that is the sweetest Isaak. I just had to comment again. Yes, Isaak does make a good kitty cat. I like his little butt and the back of his head.
Mutha

Okay, well I was gonna post about the chairs too, but lindsay and valinda covered it! I think you'll find it'll be easy and make you feel super successful. Soon you'll be an unstoppable decorator do-it-yourselfer!!

dude---you are amazing. I wish I could get out of my funk. You might inspire me to do something...well when we get a job again...and have money:(

I am so excited for your chairs! I can't wait to see the results!

I'm sooooo excited about your chairs. Can't wait to see before and after pics.

I love your canister inspiration..they are soo cute!! I always watch those shows on HGTV and wish I had to motivation to create things for myself...but I don't!

Can't wait to see your creations!

Please tell me how you made your adorable heart-shaped pancakes! I always try to "free style" it and they never quite turn out.

I'm excited to see all of your completed decorating projects! A yoyo video is in the planning stage....be patient with us...I'll get one posted eventually.