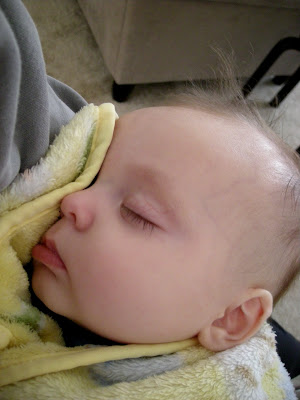 Last night was just about as horrible as the night before if not worse. Isaak woke up every hour wanting to be held and he would whimper until he fell asleep again. This morning he started screaming instead of whimpering so I tried to give him a bottle. He hasn't been eating hardly a THING since he got sick. He took the entire 4 oz. so I thought he was starting to feel better. I took him with me to go workout but once I got there he was going downhill again. He started his whimpering and he was burning up so I turned right back around and went home.
I took him to the doctor because he's just not being himself. He isn't eating, he's not smiling, he's burning up and his fever isn't breaking for more than 10 minutes, and his limbs are limp. He's never fully awake or asleep but instead he's in between with his eyes rolling around and an occasional whimper. I told the doctor all of this and she took his temp. It was 102 WITH meds, not good. She checked his ears and saw he has a definite ear infection in the right ear but his left seems to be okay, just a little fluid. She was concerned about him being so limp and his fever being so high even with meds at such a young age so she did a blood count before we left. They pricked his toe and squeezed it over and over until they could get enough blood to do the count. He didn't make a single noise the entire time, he just hugged me.
I waited for the nurse to come in and tell me everything was fine like they usually do but she didn't. Instead the doctor came in which immediately made my heart drop. She said his count was NOT normal. His white blood cells are just over 19,000 and normal for a baby his age is about 13,000. She said the ear infection can cause the count to raise, but not that much and she was worried that there may be a deeper infection. She sent us off to the lab to get more blood drawn for a culture to check the cells. She is worried he may have a bacterial infection in his blood stream...bad bad bad.
I was freakin out all the way to the lab. I can't believe this, I'm so stressed. When we got there they wrapped the rubber band around his itty bitty arm and tapped for a vein. OH my freakin gosh..my tiny baby is getting blood drawn from his arm. I started crying right away and Miah was watching me sayin, "It's okay mommy, Izey is okay. Are you okay?" The stood there and practically sucked my little man dry taking FIVE cc's of blood. They wanted 6 but they couldn't get anymore. He screamed the first half but then surrendered and just laid there all limp with his big blue eyes lookin up at my tearful face. It was horrible, HORRIBLE.
We're home now and we should know by 3pm what the outcome is. If he does have an infection they will more than likely admit him to the hospital this evening from what the doctor says. If not, they will probably do more tests tomorrow to see what is causing his count to be so high.
I'm really upset about all of this, he's my little baby and I hate not knowing whats wrong with him. I was talkin to Bonnie about how it is scary when even the doctor gets serious and urgent. When she told me that we needed to get the culture done immediately and she would be keeping his file on her desk so it's at the front of her mind all day, that made me nervous. It's good, but it's scary.
Please keep a prayer in your heart for him!
Posted by Jessica the Jacked LDS at 12:29 PM

Oh Jessica---I am almost in tears for you and Izey:( I will say a prayer right now. This sounds like a nightmare:( Poor little babe:(

:( I will definitely be praying for you guys. I can't stand a hurting baby. I don't want Makena to ever get sick. I won't know when to take her to the doctor and when to try to handle it. Thank goodness you were able to get him in and are going to find out how to treat it. That is such good news. I'll look forward to the update.

Poor baby! It's the worst when you see a baby like Izey sick. He can't tell you what hurts and how he feels and it just breaks your heart!
I have a really good feeling that everything will be fine, but just to be safe, I will say a prayer for your little man. And my prayers a especially powerful, since I'm so in tune with the spirit :-)
If for some reason, you need to go in to the Dr or Hospital today, bring the kids by. That is an absolute order! Call when you know something!

oh, poor little isaak and you. I'm sure the news will be fine adn we'll be thinking of you. I'll be worrying so let us know when you can! And take Bonnie up on her offer. Hi bonnie. Is Austin around to help you?

Poor baby boy! We will definitely be thinking of him and you! I'm so sorry. I really think everything will be ok, though I know this is scary. Keep us updated.

Oh no! You will all be in our prayers for sure! Please let us know what is up as soon as you know!

i feel terrible... i want my izey to be okay... this all makes me really nervous. I'll continue to say prayers.

Poor baby! It is so sad when babies are sick, hopefully it's just the ear infection causing so much pitifulness...a minor infection can wreak havoc on such sweet babies. You and Isaak are in my prayers.

Jessica!
We will also keep you in our prayers as well. It is so very scary I am sure and just know that you are thought about - even down in San Antonio from a very old friend.

I will keep little Iaask in my prayers. It is so scary when your children are ill...poor baby. Keep us updated.