You all know how I love adventures, drama and excitement. Well, today (thursday) we decided our excitement would be found swimming in the Rappahannock River. Let me tell you about this beautiful river. It runs right behind our complex and kinda makes a U shape around the North side of Fredericksburg emptying out into the Potomac. It's gorgeous, rocky and not too raging (at least not in this spot). Every time we drive by the river we see people in it either swimming, fishing or just laying out on the rocks. I knew this would be a fun place for the kids. I was blessed with kids who love to get dirty and rowdy and be adventurous so this was right down their alley.
Getting in the river was a new experience for them. We don't go to the lake or anything like that so anything other than swimming pool water is new. The kids were a TINY bit skeptical but brave enough to try it out. 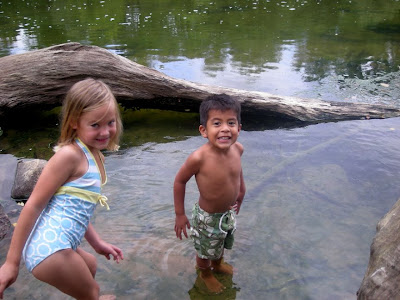 Isaak was too tired, too tiny and too hungry to get in the river so he chilled on the bank by a tree. I know it LOOKS like he could have just rolled right in, but there's actually a huge tree root he's propped up against. He wasn't going anywhere. 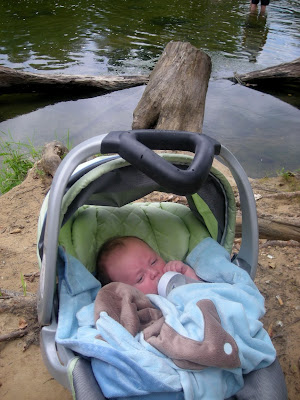 Miah totally surprised me. You know he's a freak about the water. On the way there he said he was just gonna sit on a rock with me. He didn't even want to put on his swimmer but I made him. I was all prepared to be annoyed by his whining and bellyaching about being scared and crap like that. Then, without any persuasion at all, he gets right in and just starts swimmin around like a little fish. He loved it!! 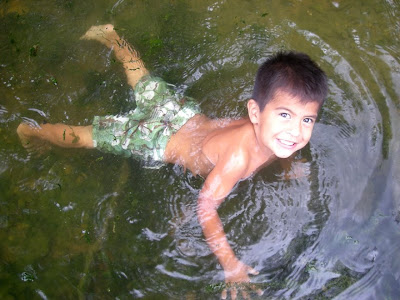 Kora and Jake used their goggles and snorkels to watch the tiny fish. I had given the kids a short history lesson as we drove there telling them that the Rappahannock is a really historic river because it was used as the divider between the North (Union) and the South (the Confederate States of America) during the Civil War. I googled this information...don't think I'm all smart or something. As Kora was snorkeling around she screamed, "I SEE BLOOD!!!" and then she says, "I think it's from the Civil War!!" 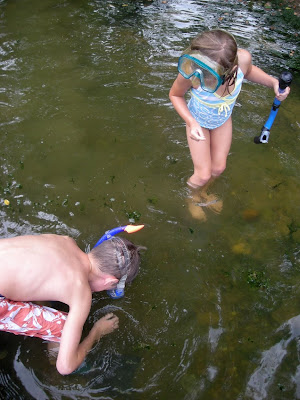 Isn't Jake a cutie bun? He found some of those things that grow on the bottom of boats (what are they called?) and freaked out thinking he had discovered gold or something. 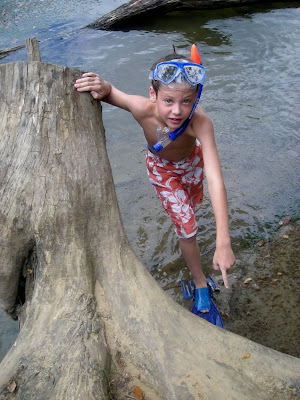 Miah was such a little man exploring with his goggles and climbing all the big rocks. He wasn't concerned at ALL with the water, the rapids or the fish. So independent! Maybe we are growing OUT of the whiny stage?! Noo...that would be too good to be true. 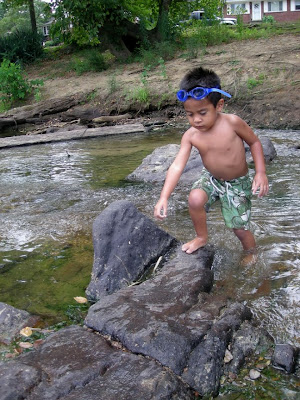 Isn't it beautiful?! The water is SO clear too. You can see straight through to the bottom! 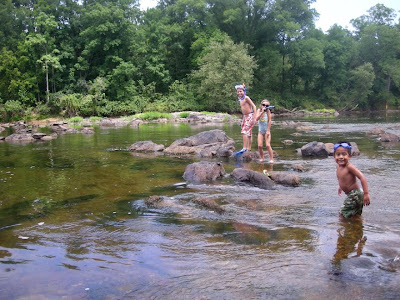 Izey and I sat on a rock in the water when he was done eating. His first swimming experience EVER was him dipping his toes in a piece of American history! Awww Yea! 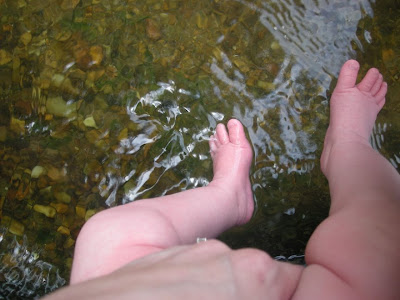 Okay, there is SO MUCH I love about this picture. The three big kids facing out to the big wide open world, the hand holding, the dirty bum, more bars in more places...

It all has so much significance to our real life. 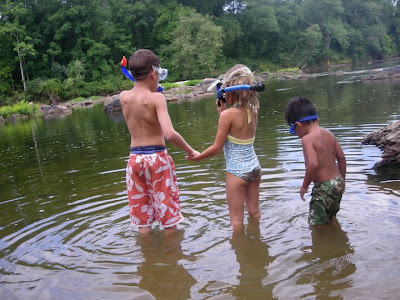 Here's Miah's sweet face and a gorgeous view of the river. How could anyone say that being in the river is gross and germy and bacteria filled? *cough* Bonnie *cough* 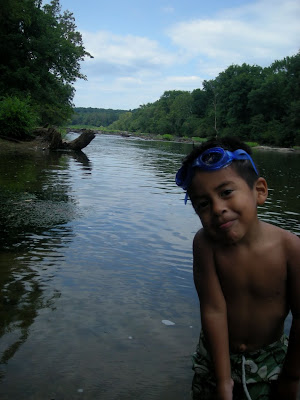 Here's me and Isaak on our rock. We sat here, watched the kids, got our feet wet, took pictures and talked on the phone. I only managed to drop Isaak in the water 2 or 3 times while on the phone and snapping shots of the kids but he didn't mind it at all, he just doggie paddled until I had a chance to grab him. (why is my face so freakin fat? I have like dimples in places there shouldn't be dimples...yuck!) 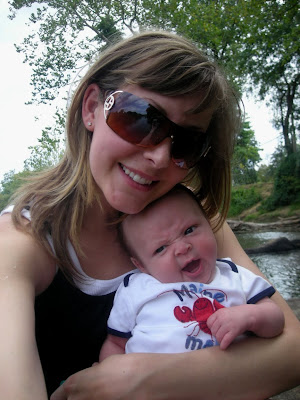 It didn't take long until he passed out, it was a long day. The kids had a TOTAL blast and are begging to go back another day when we can stay ALL day. 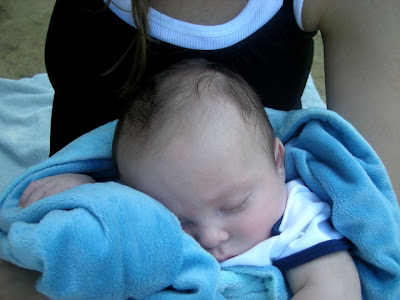 Posted by Jessica the Jacked LDS at 9:22 PM

So, this blog just showed up today for me... weird. Anyway, so I think the word you are looking for is either Barnacle or Alphabet... not sure which :-)

how pretty....me and the kiddos enjoyed the pics....glad y'all are getting out and having fun...that's more than i can say for myself :)

This was at the bottom of your new post... i can't believe how little your babies were when we lived there. Makes me sad to think of all the years that I've missed. I just want to be your neighbor so that I can see your kids grow up.