Yesterday was officially named Jason Castro Day in the city of good 'ole Rockwall. The man himself came for a visit to the harbor to perform for his hometown and accept a key to the city. I wasn't planning on going, I knew it would be crazy. I had already decided against it when I found out from my FIL about the day. Then my dad informs me about it and I STILL insist on not going. Even when one of my favorite friends texts me about it, I tell her I'm not going. Well, all that went to poop when my dad comes in my bedroom yesterday morning all excited about it and starts saying we can all go as a family and make it a fun family night! I couldn't say no to him again, he just seemed too excited about it...so we went.
When we first got there at 4:30, things were pretty calm and not too crowded. We found a PERFECT spot for us to hang which was like a balcony overlooking the harbor with benches and everything. It was deathly hot though. The kids were dying. Kora had worn her swimmer under her clothes to go play in the waterfalls so she and Miah did that for a bit to cool off. Miah gets SO much more tired in the heat and sun than the other kids do. He just can't take it! 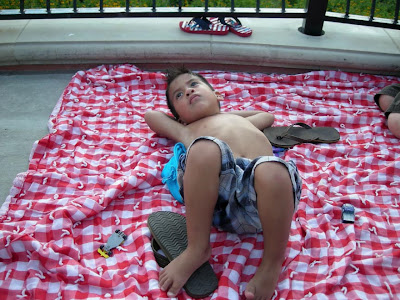 Jason wasn't scheduled to perform until 6:30 so we ordered food from one of the restaurants on the harbor and ate it in our cozy spot. 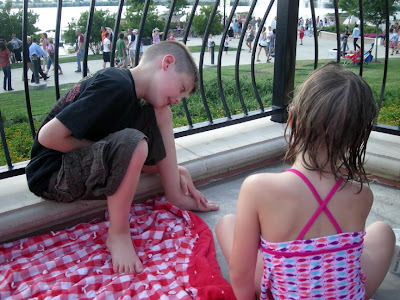 Quickly, the crows started flooding in. There were several news helicopters hovering above too. It was quite the scene. Meanwhile, I was dying of heat and sweating like a cow. 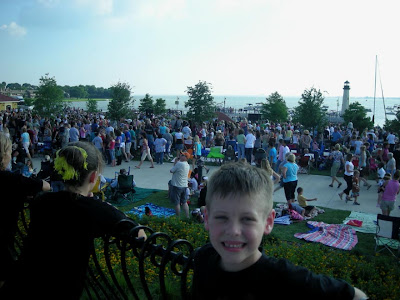 Some friends from church met us there and hung out in our spot with us. Don't worry, they didn't get to be in such a pristine location without payment...they brought brownies.

When he FINALLY arrived (via boat from the lake) there were MORE than enough presentations offered to him. It took FOREVER for him to finally sing. Everyone was annoyed. When he finally sang, we could barely hear him. Plus, our view became non-existent with the crowd and that stupid tree right in the middle of my shot. You'd think a seasoned performer would know to move around the stage a bit, but no...he didn't. Oh wait, he's not a seasoned performer. You can watch (aka listen) to my video but there isn't much to see. When I move to the left a bit, you can see him just BARELY to the left of that middle tree. He's in a red plaid long sleeve shirt if you have good eye balls.

So the whole thing was a crap show, but hey...it was free and the time spent was better than being at home doing nada. At least we had conversation and then cherry limeades afterwards!

Posted by Jessica the Jacked LDS at 8:03 AM

oh Castro... what will i do with you... you're just not THERE yet. I love you but you're a little "WAH WAH". oh well. Glad you had fun in your lobster skin.

Man I am so not for being the heat right now!!!! I do LOVE cherry limeades though:)

Well now that I know who he is, thank you Google, is he insane?? A long sleeve plaid shirt?? They claimed on the news thing I read that it was a "screamfest" somehow your story and video didn't portray that...maybe it was the view from the helicopter!

I am one of Jason's fans from Florida, and I have to say shame on all of you who posted here so far who have nothing but criticism about the guy. Have any of you ever tried out for anything as awesome as American Idol? Do you realize how grueling an experience it is, and how proud you should be that a wonderful young man from your town has made it as far as 4th place, the same place as Chris Daughtry, to name one other famous person? No, Jason is not there yet. Have you gotten "there" yet in a few months from something you started? He is a work in progress and getting better. He himself has admitted being inexperienced; but he was good enough to make it into people's hearts. Too bad you all can't see that. As far as his clothing, it is his prerogative to wear what he wants. I liked the plaid shirt on him. Why don't you try and find out more about him instead of judging him only from the outward?

Guess you should have stayed home! I would have traded places with you in a second! Oh course I am a Jason Castro fan. God Bless.

LOL...all these random fans griping. Obviously the Floridian doesn't realize what a humid TEXAS afternoon feels like, hence knocking the LONG SLEEVED flannel. Good for you though for braving the heat and letting your kids enjoy seeing him. I'm sure it's an experience they'll never forget. I couldn't bring myself to go either. I loved watching him in the AC from the comfort of my own home. Plus, just getting home yesterday was a mad house. And, thank you, for i am now craving a cherry limeade.

Did you get a souvenir dread?

The shirt is plaid cotton, not flannel. It said True Love/False Idol and he wore it on the show,maybe with Mariah.

Just to clarify for my psycho Jason Castro readers...

I like Castro, he was my favorite and I wanted him to win so give it a rest. The show, put on by the city of Rockwall was blah...they did a horrible job. WIth that, and the heat, it sucked.

Do me a favor, don't do a google search, land on my blog, read ONE entry, and assume I hate Jason Castro. Ignorant.