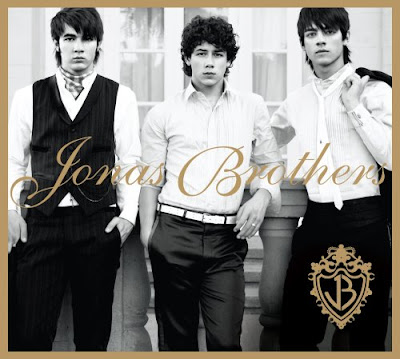 Being the super fun mom that I am (pfff, yeah right) I did something great today that I'm SOoOoOoOo excited about!! I had been feeling really lame for not having the funds to purchase $1000 tickets to take the kids to see the Hannah Montana concert when she came. I wanted them to go so BAD and they were totally in to it, but it was absolutely unreasonable to succumb to the jerks that scalped all the tickets. So instead...we missed out and we'll probably just go see the movie they made from the concerts.

BUT, yesterday I had a marvelous epiphany. I heard that the Jonas Brothers would be visiting this great city of mine, not ONE...but TWO times for their upcoming tour! I was stoked. I immediately went online to snag some tickets assuming there would be plenty with two dates to fill. I was quite wrong. BOTH concerts were completely SOLD OUT. The only tickets I could find were people who had listed their pre-purchased tickets online for MUCH higher prices. Thinking I could just get the absolute WORST seats and pay hardly anything, I kept searching. The theater is split into 4 sections... the 100's the 200's the 300's and the 400's being the farthest nose bleed section. People were selling their 400's for $100 EACH. There was no way, I gave up searching for a bit and moped around the house.

After recharging my motivation, I decided to look on craigslist, but I wasn't surprised to find the prices STILL outrageous. Most people were selling either 2 or 4 tickets (we needed 3) and they were priced at about 3-4 times the face value. UGH. After much searching, I found this ad that made my eyeballs pop out onto the keyboard...

3 contiguous great seats in Sec 205, Row NN (center/center) for the Jonas Brothers concert on March 4, 2008 at the Nokia Theater. Interested in selling the three of them together, not individually. Face value ($50 each ticket), for $150 total.

WHAT THE CRAP?! HOW IS THIS AD STILL HERE? I emailed the people immediately, but I assumed that because it was posted almost TWO days ago, there was NO WAY these tickets were still available. I also could not BELIEVE these people were selling them for FACE VALUE!! For SURE I'm reading this wrong.

TO my sweet surprise, the ad was absolutely correct and the owners STILL had the tickets. I arranged a meeting place with the lady and voila...the tickets are now MINE!! When I picked them up, I thanked her over and over and she seemed confused. I told her how NO ONE was selling their tickets for face value and NO ONE had just three available for purchase. She had no CLUE that she could have sold these tickets for 3 times the price. I love it when people live on different planets and don't know a thing about the popularity of the Jo Bros. It makes my life just THAT much happier.

SOOOOO, me Jake and Kora will be in attendance to see the cute Jo Bros in March! Poor Miah keeps asking when we are going to see them. I don't think he knows he's not going. I know I sound like a terrible mother but come on...a TWO year old(well, he'll be three then) at a CONCERT?? Egggggg-zactly. Maybe a couple more years, miah....a couple more years... 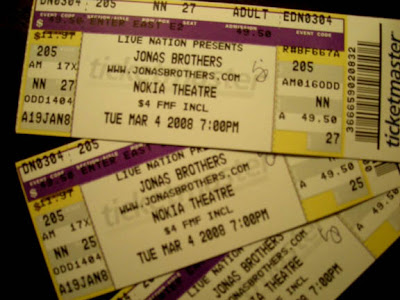 Posted by Jessica the Jacked LDS at 4:17 PM

Yes, you are obsessed and a little scary. But, good for you for snagging the tickets. I'm hoping I can bring my girls to the Hannah movie this week - we'll see if the Disney gods smile on us...

You are so lucky and I am so jealous! :)

That is so cool how everything worked out for you! I wish I was a better mom and took my kids out to things, I just lock them in the basement with boxes while I take naps. :) You are awesome to go do this, while pregnant. Way to go!!!

This reminds me of when I took you girls to see The Michael Jackson Victory Tour when you were little. Woo Hoo for you Jess.

Watch them turn out to be fakes. HA! sorry.. i hope i don't jinx you

Probably not as cool as what "The George Sisters" could have been, but still cool. Are you going as Nephites?

You saw Michael Jackson??!!! He was the best. I still remember making up dances to the entire Beat It album and getting to stay up late and finish the Grammys the year he took Emmanuel Lewis (it's all so clear now....) and won every award possible.