Where in the World is Carmen Jessica Lowe?

Well, I'll tell you where I've been (ahem...LINDSAY). I've been sick so give me a dog gone break PEOPLE! On Monday I woke up to the worst stomach ache in the WORLD and I could barely get outta bed. At first I thought it was due to the large number of pears I consumed on Sunday, but I think it was much more than that. The pears just added to the yuck. I'm not going to go into details about the sickness, just use your imagination and know that without a toilet or a trash can nearby, it could have been disastrous. Of course with the removal of all my insides, I was STARVING my brain out the entire day. Miah took care of me most of the day and sat with me watching tv and checking my fever every now and then as you can see him doing here. And no, I wasn't wearing makeup, that is REALLY how dark my eyes were because of my dehydrated self. So gimme a break Linds...whatever... 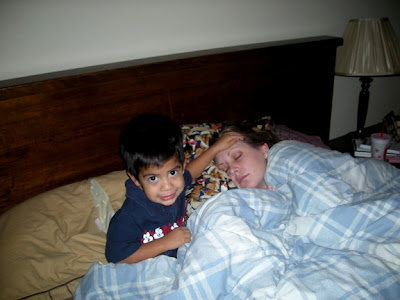 Yesterday, Jake had a performance for his music class he's in. They did a Disney themed show and sang Disney songs. The boys had to dress as ninja's and the girls were princesses. Jake BARELY sang the songs and refused to do any of the hand motions anyone else was doing because he said, "it looks gay". I kept giving him the evil eye from the audience to get him to participate. He though he was way too cool for school, literally! He did do a short speaking solo which was cute and then at the end his group took a big bow. After the bow they all went back to their place on the risers except Jake. Wanna know what he did? He stays up front and flashes the audience a big smile and peace sign like he's some star on the big screen. I had no idea he was gonna do that otherwise I wouldn't have been taking a picture at THIS time and would have gotten a picture of that! The audience loved it by the way! Dork...he's so silly. 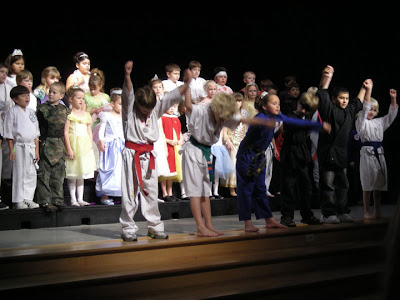 Here he is looking studly at the end of the performance with his friends. 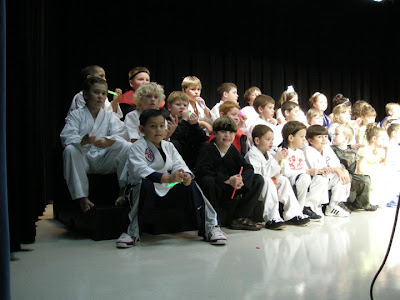 This is Jake's best friend at school, Tanner. Tanner is a little fireball and funny to talk to. He's quite the opposite of Jake, very loud and hyper while Jake is the Joe Cool who sits back and just laughs at Tanner. 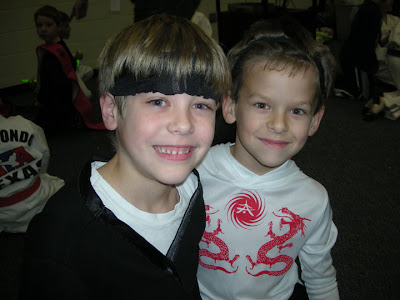 When Miah saw this picture on the computer he said, "Hey mom! it's the Jo Brothers!" He meant the Jonas Brothers and I don't know why he thinks Jake and Tanner are the Jonas Brothers but I thought it was cute!
Posted by Jessica the Jacked LDS at 8:58 AM

you poor, poor thing!!!! I wondered if you were okay...I was thinking maybe you were just really busy! That would have been much better than a wretched sickness when prego! UUUGGG! I hope you are all better now:) Jake sounds way TOO COOL for that!

Ahh jake. I hope he uses his "cool" judgement well later in life. I love him so much!!! And about your sickness... sorry i got "BORED". It's just that i sit at home everyday and check blogs about 3 times (or more) and i had checked yours several of those times and found NOTHING. So now i understand. On the flip side, i WOULD update my blog except... like i said.. i stay at home all day, have no kids, no job, and a busy husband... oh.. and a CAT. I've been working really hard on freelance though so i've had no time or REASON to post anything new on the family blog. I'll try anyway. I gave both you and daddy a hard time for it. so i guess i should quit being such a hypocrate, yes? My bad.

Too cute about Jake. And Miah is such a doll.

Oh my gosh, that is the SWEETEST picture of a mamas boy EVER!!! That looks like something Josh would do, he is always giving me little back massages to help me gear up for work. But man, that is one CUTE picture of Miah! Jake is such a cool dude too.