The REAL Santa at Northpark

Yesterday we made the hideous trek to Northpark to visit the REAL Santa and give him our Christmas lists that we decorated for him. Why did I wait until the week before Christmas to do this? I have no idea, but I was quickly reminded of why I SHOULDN'T wait for the week before Christmas. They start handing out the "tickets" at 9am so with traffic, we got there at 9:15 and we got ticket number 46!! Ugh. The story time didn't start until 11 so we left the mall and got donuts. We were back by 10:15 to get a good seat for the show but then sitting for 45 minutes with anxious kids was no fun. THEN we got smashed in like sardines and someone's foot behind us was seriously in my butt crack the entire time. The mom kept telling her daughter, "get ur foot outta that woman's butt!" but it never moved. FINALLY, it started and for the next 30-40 minutes, we listened to Santa tell stories and give us advice for Christmas Eve...still had the foot in my rear. When it was over, they started calling out numbers.
They weren't too quick about it so we left to have lunch in the food court. (yes, we're now at meal #2 for the day). When we came back they were on #37. Oh good, I thought, we're only 9 away, we'll just wait. Bad idea. The kids went bazerk and were running all over the place. I could barely contain them. I had a doctor appointment at 2 in Rowlett and it was now 12:50 and STILL number 37. I said a quick prayer in my heart, "PLEASE let us get outta here by 1:30 for this appt." They started calling more numbers...38, 39, 40...COME ON!!!! Nope, they were done. I started thinking about how I would tell the kids we were going to have to leave without seeing Santa. All of a sudden, the lady behind me asks what number I am. I told her, she said...I'm number 40 but we have to go, do you want my number? OH MY GOSH!!!!! YES YES YES THANKYOU!!!! We jumped up to get in line. The line was going pretty slow because each number had about 6 kids with them who ALL had to see Santa separately. Luckily, the three people in front of us had babies. Babies can't talk, they can't take Santa's sweet time, they just needed a picture!! Woo HOO!!
We got up to see him and of COURSE, we took OUR sweet time. Each kid sat on Santa's lap and told them what they wanted. Kora was first and told him she wanted a "Baby A lie" (this is what she calls it), and some "boots". Santa showed her his boots..."like these?!" She said, "not that big." Next was Miah. I thought he would be too scared because he hid his face in my lap the entire story time, but 4 hours later... I think he had warmed up. He hopped right up there and just smiled. Santa said, "do you want a car? a truck? a choo choo?" Miah kept smiling then real loud he said, "I WANT A MOTORCYCLE!!!" Jake was last and was real specific. He told Santa he wanted a bike at Toys R Us. "It's dark blue, has green writing on it, it's a 20 inch..." Santa just listened intently. After that, we all posed together and then it was over. We walked out of the mall at 1:28, two minutes to spare! Next year, we'll be visiting Santa in November! 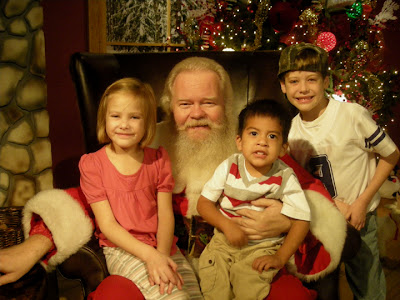 Posted by Jessica the Jacked LDS at 9:55 AM

ADORABLE picture:) I am glad P has never wanted to sit on Santa's lap yet! I can't believe you waited ALL that time....AAAAHHHHHH! I would have had to eat 4 meals in that time seriously! I won't even step foot in ANY mall until after the new year!!! I hate being too crowded especially when I feel like this!

i like that santa... he looks like pudding... all sweet and squishy and cozy. Sorry about the HELL of the mall.. enos and i just don't go to the mall at ALL during christmas... or any store for that matter except the grocery store because well.. we HAVE to eat... but other than that... poo on the mall.

Your words made me feel as if I were right there with you--super story teller you are. I could feel the foot in your gorgeous little bottom, your time stress, etc. Where is KoKo's head tilt, I wonder? Terrific photo. Lindsay's description of Santa was spot on.