So, on Wednesday, I was at Children's all day helping out with their Halloween carnival and during my lunch break, I sat in the parking lot of some store eating my lunch and talking on the phone to my sister Lindsay. While talking to her, I noticed two homeless people approaching my car, arguing back and forth. They were obviously a couple, a man and a woman and the woman was pushing their grocery cart full of all of their personal items. As they got closer to my car, they began yelling louder and louder. They were fighting about something and it got SO heated, that the woman stopped pushing the grocery cart and decided to walk away. Well, the man wasn't having that so he took the grocery cart, turned it around and started walking the other direction. When the woman saw he wasn't coming after her, SHE turned to follow him. Her arms were flailing and her face was all red and sweaty. When the man saw her coming after him, he started RUNNING with the grocery cart. This only made things worse because the woman was not only mad that he didn't come after HER, he was now trying to get AWAY from her. They went back and forth with their yelling and screaming when finally they stopped in front of a parking lot to get in each others' faces. The fight was very heated and although I was laughing about this whole charade, I felt kind of sad for these guys. I thought of how I feel when I fight with Austin and how THEY must feel with even more stress on their shoulders. They didn't have a home to go to or a bedroom to slam the door. If they walked away from each other, it may very well be the last time they see each other. How sad is that? When they finally stopped yelling, I started feeling like maybe they worked it out, but I was wrong. They then began to divide the bags in the grocery cart as if they had decided to go their seperate ways. Isn't that sad? I tried to take good pictures, but I was also trying to be incognito and that's hard to do when you're in a big white Dodge dressed as a Princess.
This is the man walking away from the woman with the cart. If you look closely you can see her in my rear view mirror, mad that he isn't coming after her. 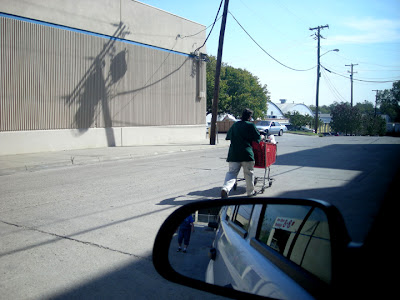 Now she's yelling at him to come back to her. 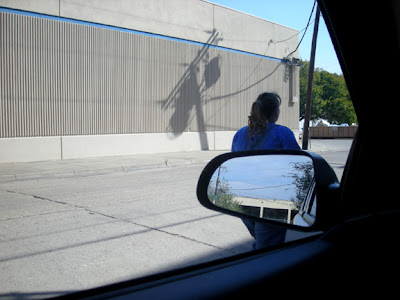 Now he is RUNNING away from her. You'll have to enlarge the picture to see how far away he is with the cart. 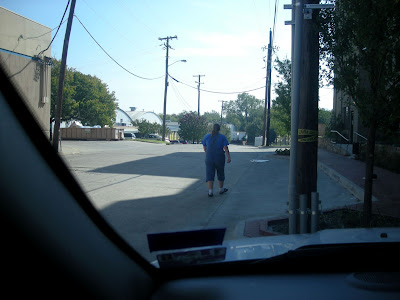 Now they are dividing the cart up. You can see that the woman has seen me taking a picture because she kinda glances toward me. 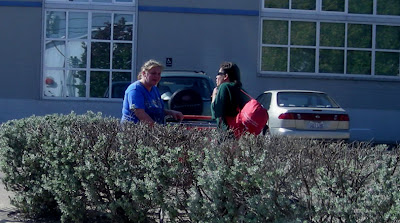 Posted by Jessica the Jacked LDS at 11:09 AM

I love how other peoples problems make ours look so silly.

sad:( YOu see the craziest things!

that's so sad...i'm really upset by this... i need to go hug my enos and say a grateful prayer that i'm not a homeless woman splitting personal items in my grocery cart relationship. :(

I love you David. Your wife Teresa