Halloween was a fun day, it's my favorite holiday of the whole year so I always look forward to the masky madness and decorated houses. Kora wasn't going to do the Mary thing again, but at the last minute she decided to stick with it. I think it was because the costume was soft and all cottony and cool and she's really particular about materials feeling right and not being too hot. Here she is in front of my parent's house by the dead guy in the casket, nice comparison between the two, huh? 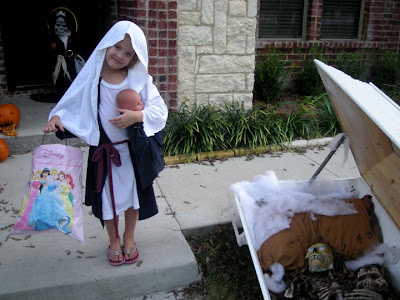 Miah decided to be a pirate and it was his idea to add the skeleton mask to the ensemble. I was impressed with his bravery and he even stood near the dead guy too! 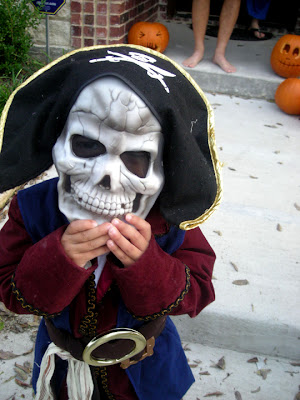 Before it got dark, we visited a few houses in my parents' neighborhood. They only have one street and a few people on the street are good friends so we had to make an appearance! Here's our first stop. 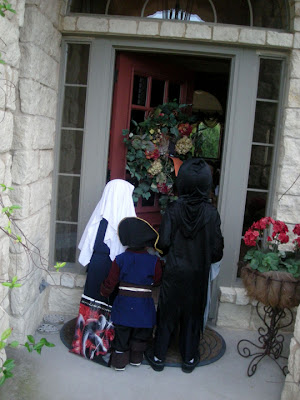 After visiting a few houses there, we jumped in the car and headed over to Keith and Kim's neighborhood. It was WAY more busy and spooky. Most of the houses were all done up and had scary music playing. Kids were all over the place, the atmosphere was perfect! All this craziness proved to be a little much for Miah so when it was time to start trick or treatin, he opted to stay with Pops and Kim and hand out candy. He did a great job passing out the loot and Pops said that every time a group came up with their bags open, Miah would open his bag too and ask for some, so he definitely got his fair share of candy. This picture is in front of Pops and Kim's house. Don't you like Jake's bloody scream mask? It's pretty gross, right? 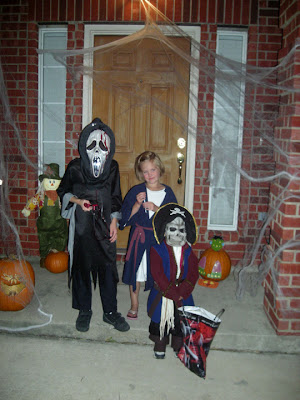 Ever since Wednesday night, this is how Miah has looked. He won't, not even for a second, let go of his candy bags. He hauls them all over the place, upstairs, downstairs, you name it. 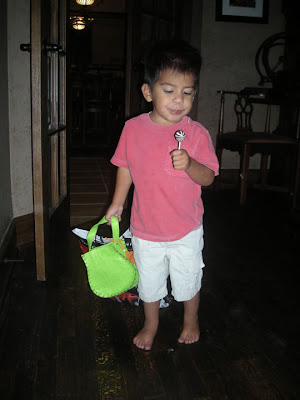 Posted by Jessica the Jacked LDS at 10:42 AM

That is ADORABLE that he will not let go of his loot!!!!!

How precious Kora as Mary for Halloween. Miah is sooooo cute. I thought Jake was gonna be Harry Potter? The scream is way cool. Funny how Miah & Jake have the same size face w/the masks on. Makes Miah look like he has a big head....hehe