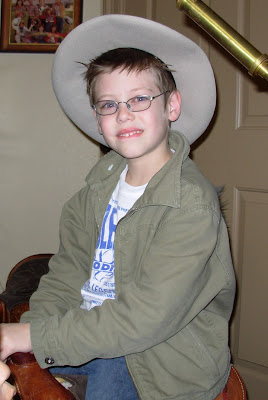 I love my Jake...I just can't say that enough, he really is the sweetest guy and means SO well in (almost) everything that he does. On the way home from school today he was telling me about a girl in his class named Maya and how she WAS his girlfriend until his "friend" Jake stole her away. I asked Jakob why he couldn't get another girlfriend in his class. Jakob said that Maya was the ONLY girl in his class that he thought was pretty because she had brown hair and brown skin. He said, "I only like Hispanic girls and she was the only one." I was impressed that Jake had discovered the beauty in Latina women so soon! When I told Austin, he was excited that we were going to have a fun wedding and some good food in our family in the future!

Jake also told me about his best friend, and next door neighbor, Luis. He said that Luis doesn't have a girlfriend because, "he lives a life like Johnny Cash." I asked Jake what that meant and he told me that Johnny Cash was too into his music to have time for a girlfriend (??). I told Jake that I didn't realize Luis was into music so much and Jake said that he's not...he's too into his teatherball game to play with the girls at recess!! :)
Posted by Jessica the Jacked LDS at 9:34 PM

I am just a mawmaw but I think that is the most handsome prince I have seen in a long time.

What an odd thing to say for a little guy.... That's just way too Johnny Cash.