This past week I've been unable to blog about ALL my activities because some of them were super duper top secret! I threw a surprise birthday party for Austin yesterday and he was TOTALLY surprised!
I had to secretly go into his email and steal all the emails to his friends to let them know about the party. I wasn't sure how it would turn out or if we would even have many guests but it really ended up perfectly with just enough ppl and fun!
I had Bonnie be my accomplice in this masterpiece and had told Austin they were coming over for dinner last night. When they got here I sent Austin to the store for some "needed" items that weren't so much needed at all. He was too quick though so I had to call him while he was at the store and tack on three more random items like fresh jalapenos?? He was so mad cuz he was already in line. His friends showed up while he was gone so when he got home and walked in with all the pointless groceries he was completely caught off guard.
Why didn't I video this instead of take terrible pictures? Because I'm dumb and I was frazzled at the moment, gimme a break!
Here he is walkin in the door. 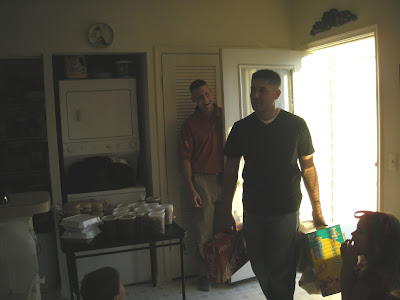 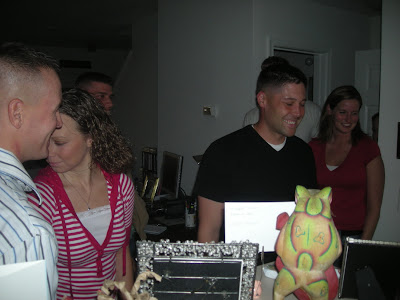 The boys told war stories all night and the girls sat on the couch and just chatted. 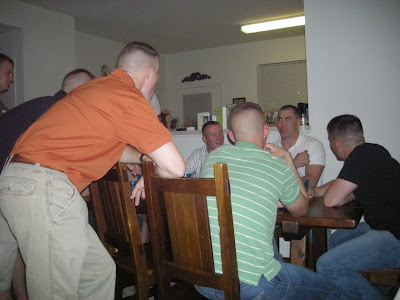 and I FINALLY got a good picture of the Jessica/Jessica (Bonnie) with her man Dave! 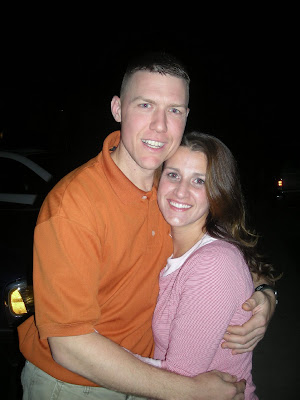 All in all, the party was a huge success! It was the first surprise party I've ever thrown for anyone and who better to receive it than my sweet lover!

Thanks Bonnie and Dave for your help!

Posted by Jessica the Jacked LDS at 7:13 AM

All I have to say is WAY TO GO! I could have NEVER pulled that off! Love the diapers and Coke, too- send him out for the necessities :)

I'm not sure how much fun the party was because I wasn't there...but it looked like you managed to have a good time anyways:) I'm glad that it all turned out great, and he was totally surprised!!! Hey, isn't it somebody else birthday tomorrow?!? Oh yeah, its Emma-Kays;)

Jess that is SOOOO cool of you!!! AND bold! I don't know if I have the guts to throw a surprise party, or to accept one myself. I'm a bit too timid for that, (I'm not kidding, it's one of my quirks) I throw my hat off to you, and LOTS of pats on the back for doing something so awesome! You rock!!!

Why to go Jessica!!!! I wanted video of Austin when he came in. He does look surprised. Happy birthday Austin. Dad & Father-in-law

Wow I wish someone would have done that for me! Is he going to return the favor???

Way to pull it off! You had a great turn out!

Wow! I could never keep a surprise like that! And I'm sure the party was why you were sneaking into his email. You know you spammed everyone. :)

He deserves it!! He did looked like he was having fun. I am glad you had a fun party, Austin. You are the best son in law I have that lives in Virginia...teeheehee...see how i covered my bases.

Love you
TEResa aka mutha in law

I threw Andrew a surprise once, but he didn't really have any friends where we lived, and I didn't either, so I invited all my co-workers over.

A little anti-climatic. I'm glad Austin is so popular!!

did the kids know? I'm surprised they could keep a good secret like that...how fun.

That is SO COOL! I have always wanted to throw / receive / attend a surprise party! I have never done any of those! I should plan one...

Good job, Jess! (I'm really taking my chances calling you that.) What a fun idea to throw a big party. Looks like you had a great turn out, and Austin does look surprised!

And speaking of...I've sent a little surprise for you in the mail for your big 3-0. But it's going to be late, of course because I'm not good with timing. But you will LOVE it, I hope.

Hey Jessica,
That was very nice and fun!!!! BTW, I thought it was your birthday today? HAPPY BIRTHDAY!!!