Yall are gonna be so mad at me. I totally screwed my job as a fabulous blogger by NOT appropriately documenting today's events. The big one...I met the Jessica/Jessica! She's totally rad and I'm honored to be considered "half" of her. We met at Lunga Park on base after taking Austin some delicious lunch. I didn't dress up for the park event, jeans and t-shirt. I planned on just dropping off Austin's food and then getting dirty and sweaty at the park. WRONG.
So on my way to the base Austin called saying he didn't want me to bring him food. Too late loser, I already got it and I'm on my way. Then he starts to tell me how he doesn't have time....just drop it off....YEA YEA YEA. I cut him off. "I KNOW, don't worry, I WON'T come in. I didn't plan it." I know the deal...he doesn't want me around the guys...whatever. It pissed me off. I didn't plan on coming in which is why I dressed totally down but for him to have to TELL me again the "rules?" made me mad. He was like, "Babe...what's wrong? Somethin wrong?" Uhmm...just the fact that you are seriously HIDING me. Whatever, I don't care anymore. SO I get there and I text him, "Come...I'm here." I waited. Nothing. UGH. I called. "BABE! Get out here..." I wait some more.
All of a sudden he emerges from the building with three other boys. What the?! No...I didn't plan for this. I looked in the mirror and quickly puffed my hair and wiped some grease that had collected in the crevasse between my eyes to look half way presentable. He came up to my door and I didn't open it but I mouthed to him, "I DON'T WANNA MEET ANYONE!!" Too late, they were already there.
I got out of the car and straightened myself out. The boys were nice. Alvis not only LOOKS like a gorilla, but talks like one too. He's all deep voiced and majorly manly. Candelario is a cutie pie with great skin and Bittner doesn't say much but neither did I. Maybe he was caught off guard like me. When they left I asked Austin if that was Alvis' real voice. It is. They were all super cordial and even asked me why Austin has been hiding me this whole time..uhmmm good question. I totally look forward to hangin out with them and their wives sometime soon, they seem like good boys.
So the park was great. We were there literally ALL DAY LONG. I got there at 11:30 and we didn't leave until almost 7pm!!! Craziness. The kids had a blast and loved Bonnie's grubs. I met another wife named Paige who seems pretty cool! She didn't stay long so hopefully we'll hang out again and talk more. That is if I didn't scare her off with my rowdiness.
After talking for a million hours, Bonnie and I found out we are eerily similar...and our kids look like they were spawned from the same sperm and egg combo. Scary. The BAD news is...I didn't get a picture of her. SORRY Kempylulu...forgive me PLEASE!! I will do better next time. Only thing is that Bonnie informed me she's not a makeup wearer except on your first introduction. So this was my only day to get a makeup pic. Maybe I can talk her into wearing it another day. Either way, I'm sure she's cute even without it. Actually I KNOW she is because I HAVE a picture of her on another blog without makeup but I've been threatened to use that here for viewing purposes. Since I don't have ANY friends here..I'd like to keep the ones I'm TRYING to make. I better not post the pic. Sorry.
The kids got 100% filthy from head to toe. This picture doesn't do the filth justice. Kora had so much brown sandy mud on her she looked like she had a bad mystic tan experience. Raunchy I tell you. That girl in the background with the red shirt isn't Bonnie, it's Paige. So yea, see her buff arm? She's buff all over. She's fat free. Unlike me. 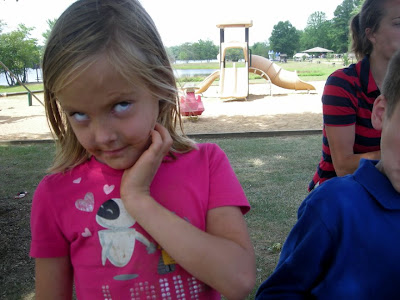 After being there SO long Austin came by after he got released and hung with us for a bit. Izey passed out after the LOOONG day in the sun which he was totally PERFECT for. Isn't he a hot Marine!!? 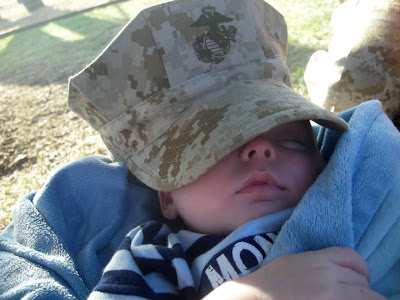 I'll do better, I PROMISE!! The Jessica/Jessica picture is coming SOON...
Posted by Jessica the Jacked LDS at 8:49 PM

I wear make-up by appointment only. I'll try to squeeze you in next saturday, since there seems to be a hot party going on. I hope I'm invited!

I want to see the Jessica/Jessica. I bet she is cute. I liked the buff arm also. Thanks Jess. Sounds like you all are having fun and loving it there. That is wonderful. Love you...the mutha