Here we go with the random stuff again...

This was a while back, but I found these two in the closet playing ever so quietly. I had assumed they were playing together but after a closer look, I saw they were playing two separate things QUITE differently. Jake had his Nerf Long Shot set up and kora was playing ponies and doing all their hairdos. I think it's so cute that in this moment they are such yin and yang, complete opposites in their likes. How does that happen? What is instilled in the boy and girl DNA that makes them so different? I told Kora to get ready for bed last night and when I was done washing my face, this is what I found next to my bed on the floor. She told me they were triplets, all "1 years olds" as she says. I love it! 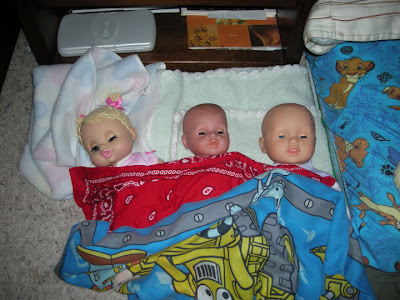 Here's my makeup queen. I love how serious she gets when she's putting on her eyeshadow. I of course interrupted the seriousness and now she's laughing at me in the mirror, but you get the point. 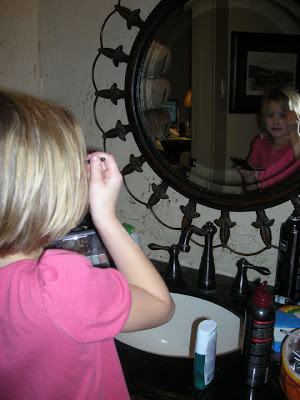 Posted by Jessica the Jacked LDS at 12:51 PM

I got a peacock ornament in an ornament exchange....I will have to send it to you! I don't know if I will get it out before Christmas though! I am not very together right now! YOu will have to e-mail me your address there.....
amanda@whitleyspace.com

i did the same thing with my cabbage patch dolls when i was little.

i love this picture...it's so perfect... what fun little people. kora reminds me of you and I when we'd spend ours doing barbie's hair and playing out love scenarios between her and ken.

How adorable!! I love the makeup picture and the triplets!

i think it's great they can play in the same room together! chris and corinne were about their age when they started fighting all the time. hope that doesn't happen to yours! love the girlyness of kora. perfect since she's your only girl....so far. :D